It’s the Boston Tea Party! How did the GOP party think their subversion of the name was at all appropriate? Rebellion, liberty and freedom and not just for the 1%.

A redcoat invokes Death before an explosion.

Crane monologues on his love for his wife while sitting in the car. A woman sobs on the phone. The woman let him into a car protected by a remotely controlled security system so he could use the sound system. Effective security system.

Irving is not happy about Jenny’s escape. Crane sticks up for her. Irving isn’t impressed with CRANE vouching for her sanity.

They have 12 hours to find Jenny before he puts out a nationwide warrant because she stole $4000 of camping equipment after claiming to see a demon? Seems a bit extreme. It’s not like she’s been accused of assault or murder.

After getting out, Jenny’s first stop is a pub!

A man teaches a kid the piano. He receives a phone call giving him instructions then takes two thugs and goes to the bar.

The barkeep denies he knows Jenny but the creepy dude says “Lies require commitment” before demonstrating unusual powers. And opening his roll of implements. Torture implements.

“Go to hell,” says the barkeep.

“No need for that Mr Clarke, in due time hell will come to us,” says the mild-mannered piano teacher.

It’s Sleepy Hollow so we need the cheesy lines.

Apparently Jenny has committed more than one crime, there’s a list. She’s also travelled a lot. Presumably she’s been getting TRAINING FROM SARAH CONNOR.

Crane thinks Jenny’s longest-running foster home might help; she was in 7 in a few years but this home lasted nearly a whole year.

The bartender is in two pieces, his body hanging from a hook on the wall and his head poking up in the triangle on a pool table. I expected him to speak but we’re spared that sight.

Foster mother is a total bitch taking money for another foster child who is sleeping on the floor while suffering symptoms of malnutrition. Abbie offers not to bring down trouble if she gets information then she says she’ll contact family services anyway.

Bitch asks, “Who you really mad at anyway? Me or you?”

Crane stands in front of Abbie so she can’t lunge at the wicked foster mother.

Mills and Crane arrive at a house, a lead the foster-bitch gave them. (We won’t discuss the unlikeliness of Jenny staying in this foster home for any length of time or the likelihood of this foster-mother knowing Jenny well enough to help them at all ever, let alone several years later.) Abbie goes straight to pick the lock.

Inside they discover it’s Corbin’s home. Abbie, his mentee and fellow cop, didn’t know. Then they find a photo of Corbin with Jenny. Maybe she didn’t know him all that well. I expect surprises — even more plot holes — in the future.

Cue confrontation between sisters, pointing guns at each other for no apparent reason. Crane steps in and points comments. He’s clever.

Corbin sent Jenny to procure artifacts for him then, just before he died, he sent Jenny to this place. He told Jenny to keep something safe for him so she’s there, and stayed there waiting for Abbie to arrive, although she knows exactly where it is and had no reason to hang around for a night and many hours the next day.

Jenny pulls out a box.

Crane recognizes the contents as a magic sextant that could shift the tide of the war.

The sextant is a projector. It contains a survey map of Sleepy Hollow from Crane’s era that pinpoints the location of the missing chest hiding the Lesser Key of Solomon.

Just as they finish talking — timing! — shots are fired. It’s the redneck brigade. Most escape but the creepy piano teacher is taken prisoner.

He’s a Hessian, a German obsessed with supernatural artifacts just like Hitler. He says the chest contains a key to a door that can release 72 demons from hell.

He rants about their secret terrorist brigade: “We’re your neighbors, even your friends…” I like that he’s white not Middle Eastern.

He declares that they’ve all met the sleeper cell leader. He claims it’s the monster from the wood. “With each dark spirit he brings in to the world he gets stronger.”

He takes a cyanide pill and dies.

Crane’s eidetic memory wins. He uses a permanent marker to draw the map on the back of the 18th century painting.

As the sun sets on a quaint white church with a classic steeple men arrive to search the building. One tastes mortar to decide where to smash the wall. Apparently the obvious bricking-in of a fireplace wasn’t enough of a clue.

The men in the church find a book, the Lesser Key of Solomon, which is a grimoire on demonology. A guy does the Klingon-palm-slashing maneuver to spill blood on the grimoire that turns to words then the font spews larva.

Minion: “He sounds like a Vogon.” And I’m the one listening to the Hitchhiker’s Guide at the moment.

Odo’s people emerge from the fountain around the font. [Shapeshifters from Star Trek Deep Space Nine.)

The CGI is cheesy to go with the plot and dialogue. Oh, so, cheeezy.

Abbie throws the Lesser Key of Solomon into the portal so all the demons follow it back to hell. No one seems worried they’ll READ IT AND COME BACK. Why should the demons have such a pretty book anyway? I’ll take good care of it because UNIQUE ANTIQUE HARDCOVER BOOK.

Crane says, “They left without a farewell. How impolite.” He’s not sorry to see the pretty book disappear.

Jenny asks Abbie about Crane. She shares the Revelation quote. Sounds like they’re not going to kiss and make up any time soon.

Those false eyelashes are in danger of falling off with the tears.

Abbie offers to get Jenny out of hospital in less than 6 months although Jenny only had 6 months left. But she’ll be boss of Jenny. Sleepy Hollow is becoming part Terminator, part A-Team busting Murdock/Mills out of psychiatric hospital

Abbie says, “Sorry that it took me so long to find you.” WTF?! She was never lost, Abbie just wasn’t on her side.

Crane figured out that the demon trying to rise is Moloch, a demon of child sacrifice. And now we know his name. CREDITS ROLL.

We don’t know but we can possibly assume that the child learning the piano is dead.

Crane is definitely my favorite character with the best lines. Abbie Mills is my next favorite although she’s rather two-dimensional and is more the “straight man” for Crane’s dialogue. Jenny Mills is completely unbelievable: first she’s a psycho in hospital because she can’t cope in the real world, then she’s a kick-ass Sarah Conner-style chick WHO KEEPS GETTING CAUGHT AND PUT IN A PSYCH WARD. Still, as an additional team member, Jenny brings skills and adds conflict.

I’m not rating Sleepy Hollow because you’ll either love it for the cheese, the humor and the characters or you’ll hate it because of plot holes and cheese. It’s personal taste. 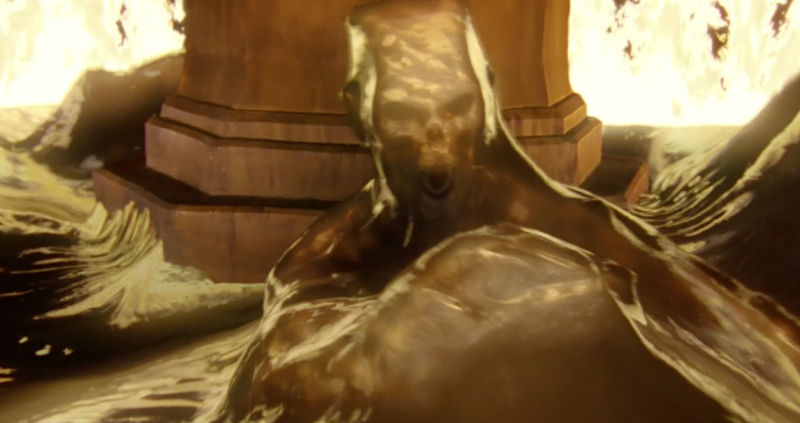