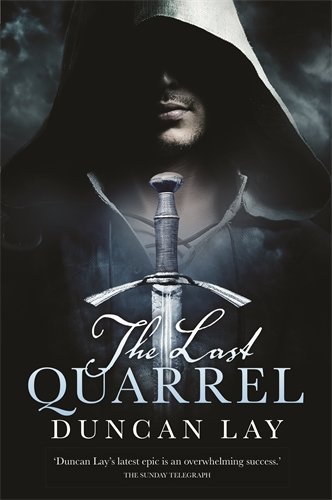 The Last Quarrel is the first part of a new epic fantasy series by Duncan Lay. It is so epic that The Last Quarrel has been broken up into five episodes, scheduled to be released as ebooks over the next few months and as a complete edition either in paper or ebook.

The book is set in the kingdom of Gaelland, where King Aiden rules. Aiden is a cruel and bad-tempered king and the land is suffering under his rule. Things are getting worse. Fishermen are disappearing at sea and children are being taken from the city streets. Rumours of selkies and witches are rife and people are terrified. Prince Cavan has been biding his time until he becomes king and can put the nation to rights. However, he cannot sit back and watch the evil unfolding around him.

Then the ship of Duke Kinnard, the cousin of the king, turns up beached at the small village of Baltimore – empty. The Duke and his crew have all disappeared. Fallon is the Duke’s Man, the Sergeant in Baltimore. He is determined to find out what happened to the Duke and prove himself a hero. His wife, Bridgit, is terrified that he will rush into danger. She desperately wants him to be content with a quiet life.

Meet the characters… and fall in love

Episode One serves mostly to introduce the characters and set the scene of the story. From this first taste I think the book and the series have a lot of potential. The characters already have depth: I felt drawn to them, wanting to discover more of their story. Having read some of Duncan Lay’s other work, I expect the relationships between the different characters will be a big part of the book. He’s already set some of this up.

Some of the themes of the book are already apparent. There is the need to balance safety with risk. Prince Cavan and Fallon both have their own pressures to ignore risk and stay safe and yet there are some risks that are worth taking. Sometimes you need to take a risk in order to do the right thing, to protect others or to gain something important.

I think the theme of loyalty is going to be a big part of the story as well. Fallon and Prince Cavan both want to be loyal to the crown. But at what point does loyalty stop being enough of a virtue to justify what you do? How do you balance duty to your lord with duty to honour, to doing right?

Episode One of The Last Quarrel promises a story with strong, well explored characters, mystery, action and depth. I look forward to reading more.

Episode one is free. It’s a gateway drug. — Editor