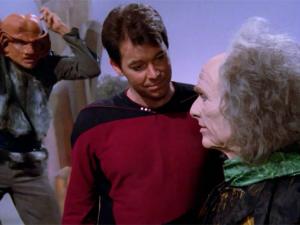 The USS Enterprise pursues what they suspect is a Ferengi ship. The Ferengi are little more than rumours to Federation citizens; records don’t even include images of the race. The Ferengi ship and the Enterprise come to a stop above a deserted planet, the former home of a powerful empire now fallen into ruin. It’s the last outpost. [Surprise!]

Each ship believes the other’s technology is holding them prisoner. The oh-so-noble Picard attempts to bluff his way through, using deceit to win the day. Like that’s not going to backfire.

Riker leads an away team and the Ferengi join them on the planet — to rob them. For profit. Because the Ferengi are disgusted that Tasha Yar is “forced” to wear clothing and Federation officers wear gold communicators.

They don’t mention women Ferengi chewing the menz food in this zode, that comes later. But the clothing, rampant sexism and ethnocentricity is established right from the beginning. Ferengi disgust at gold jewellery is blatantly inconsistent with Deep Space 9, however: there gold is not valuable, it’s the latinum pressed into the gold that has value.

Armin Shimmerman is one of the Ferengi. He doesn’t seem to be the cook (that’s his backstory on Deep Space 9) so I’m not sure if he’s supposed to be the same Ferengi or if Ferengi “all look the same”.

‘The Last Outpost’ is a poverty-stricken version of Blakes 7‘s ‘Duel’ where two ghostly women force Blake, Travis and one companion apiece to fight to the death for their ship’s survival, winner take all. Blakes 7 was a good story developing characters, the nature of the bio-androids crewing Travis’s ship and exploring the cost of war.

Watching the Ferengi perform like chimpanzees on stage (jump right, group, gesticulate, jump left…), making simplistic arguments to enlighten the Federation by comparison leading to a chummy conversation between the Gatekeeper and the noble colonialists… ‘The Last Outpost‘ is far from a highlight.