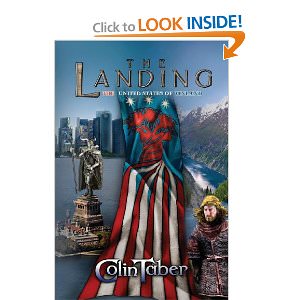 The Landing is an alternate history where the Vikings settled America instead of leaving or being absorbed into Native American tribes. In the opening chapters, two boats of Vikings are shipwrecked on the shores of this new land. The Vikings intend to settle in America to escape the Christianisation of Greenland, but they lose many of their people and supplies along with being separated: the two boats are shipwrecked in different locations.

The colony the reader follows is peopled with devout worshippers of Odin and the pantheon of Asgaard. Amidst signs from the gods, they survive and begin to prosper. During explorations, the two colonies meet; revelations follow that a trusted fellow emigrant from the ‘other’ boat murdered members of his own crew as well as natives within hours of their stranding.

Contrasting the settlements could have led to a black and white dualism, but even the ‘good guys’ think of women like a commodity, like a piece of meat to be consumed. The best of the good guys loves his wife and allows her to speak, to contribute more than servitude to the community, even while thinking of the need for women for the men on his crew as if he’s worried that a plague of blue balls will wipe them out.

There are good plot points: a wolf terrorises the settlers, Maslow’s first two pyramid levels (food and shelter today and security for the future) are the primary focus before worry about relations with the skraelings (probably Native Americans) concerns the settlers. Evidence of a puppet master occasionally rears its ugly head such as when a would-be lover gives the silent treatment because the woman to whom he’s attracted is about to act independently, then as soon as she’s gone the man regrets his temper and chases after her. Puppet mastery is a common problem for a first-time author.

The dialogue and the narrative are heavily inspired by the style of language used by the Asgaard in the movie Thor. While this kind of pseudo-King James English may be stylistically appealing for some readers, I found it jarring, especially in portions of the narrative.

I felt the author could benefit by input from someone with expertise in survival skills, especially logging, growing and hunting for food, along with mentoring in ‘show don’t tell.’ The Landing would have benefited from a professional editor.

Colin Taber has considerable potential as an author if he’s prepared to seek out mentoring opportunities and to hone his craft. On Amazon and Goodreads The Landing has about four stars; I think Taber is capable of writing to a four star rating with more training and experience. I give the Landing three stars.