Ren is a Reaper living in London in a society of Reapers. The problem is, she’s also half-Japanese, which makes her a Shinigami or Japanese death spirit too. And the London Reapers are RACIST. With the focus on anthropomorphic “deaths” (yes, multiple deaths with one Death), the title The Keeper of Night makes total sense.

A High Reaper or High Reaper’s daughter who is a High Reaper in training (I’m not quite sure which) abuses her powers and her position to incite a gang of her friends to bully and assault Ren.

This time Ren can’t control her Shinigami power that taps into light. Street lamps explode, injuring the High Reaper’s daughter. Ren flees London in search of her mother and a possible new homeland in Japan. However, her half- and very white brother Neven insists on coming too.

The Keeper of Night could have been your average quest adventure and travelogue. Instead Ren & Neven flee with Reapers in hot pursuit. After an encounter in the Channel, Baker skips most of the journey until she arrives in Japan. Then the story picks up with locals branding Ren a foreigner while she’s struggling with the language learnt from books. She can’t even dress herself in a kimono. And no one answers her questions.

Eventually she finds the underworld only for the Japanese Goddess of Death Izanami to give her a new quest: to kill three beings she claims took more human souls than their allocation.

Ren will do anything to be accepted, even murder. But it’s not that simple.

The blending of Britain’s Grim Reaper mythology with Japanese beliefs makes an interesting combination, then adjusted for storytelling purposes. Baker makes unusual use of the “journey” trope, delving into racism experienced by bi-racial people with an engaging story arc. It’s interesting to note that Baker herself is Japanese, Chinese and Irish, so she’s not only multiracial but it runs in her family. Her experience of prejudice clearly informs her writing.

However, I felt the ending, which is also preparation for the final installment of this duology, was rushed. Too much happens within too short a time span. I can’t believe I’m going to say this but I think Baker should have taken more time, more words. Even if (shudder) it meant a (shudder) trilogy. (I think a few more chapters would have sufficed though.) Readers who prefer shorter reads will appreciate Baker’s brevity here.

In the beginning Ren’s behavior reveals herself to be a pretty awful person or at least one who “kicks the cat” (others abuse her so she abuses others within her power, as seen at her callous reaping of souls). And yet Ren thinks she’s an ok person. Or at least that’s what she tells herself. Later, Ren decides she’s an awful person when she has the potential excuse of “I am only following orders”. Her admission actually engendered a bit of respect from me because it shows some degree of awareness. Then other things happen (spoilers) that Baker foreshadowed well.

The Keeper of Night is imaginative and original, with engaging fresh characters grappling with age-old dilemmas. For 90% of the story I was immersed and engaged. However the final couple of chapters of this installment were, in my opinion, too action-packed but plot-wise, not in the splodey way. Therefore I’m giving Keeper of the Night 4 stars. I am looking forward to discovering what Baker plans for book 2.

Although The Business of Death trilogy is much more European-focused in its mythical sources without the contrasting Japanese culture, I think readers who enjoy Jamieson’s trilogy will enjoy The Keeper of Night. 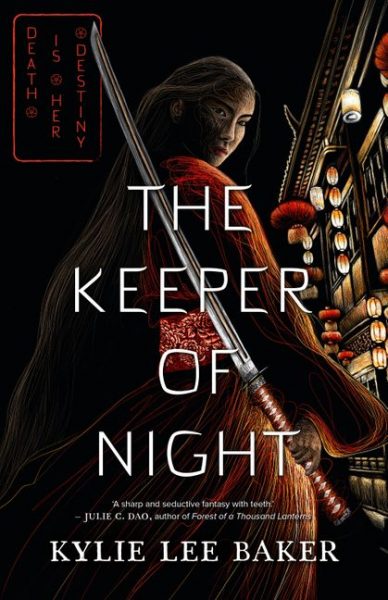