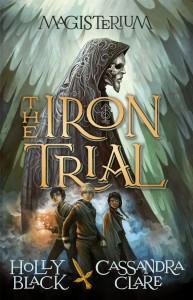 Twelve years ago a loving father and husband scales a cliff-face, using magic to create hand- and foot-holds, intent on finding and protecting his family. Everyone hidden in the cave high up on the cliff-face is dead, including his wife. A pitiful cry sounds. His infant son survives with one leg shattered. However, his wife’s dying words, scratched into the ice with her precious dagger, were ‘KILL THE CHILD’.

Callum Hunt is now twelve. After 10 surgeries his leg is scarred and pinned in 16 places. Callum can’t do gym or sports with the other children. He has no friends at school, he just gets by. Then he’s called in for magical testing to see if he’s good enough to go magic school. (Hogwarts totally should have had a test not just a ‘we magically know if you’re magically good enough to attend’ letter.)

Callum’s father Alistair hates magic with a passion, blaming magic and arbitrary magic wars for his wife’s death. Alistair has filled Callum with fear of the Magisterium (magic school). They plan for Callum to deliberately fail the test with comical consequences. He fails so spectacularly that he gets a negative score. By the end, Master Rufus (think Samuel L Jackson) knows Callum is deliberately trying to fail so takes him on as an apprentice (think Karate Kid).

To Callum’s surprise, he makes friends with Tamara and Aaron, Rufus’s other two apprentices, with whom he shares living quarters. Their friendship is a rocky road with adventures and a Dark Lord called the Enemy of Death who is a Chaos Mage.

The Iron Trial is part Karate Kid, part Harry Potter, all hero’s journey and — I believe — set in Cassandra Clare’s Mortal Instruments world while aiming at a slightly younger audience. This is the best representation of disability for a younger audience that I’ve read in a long time, with Callum’s leg holding him back while he perseveres through pain then pays the price for over-exerting himself. I highly recommend The Iron Trial to everyone who loves Harry Potter and the Philosopher’s Stone.