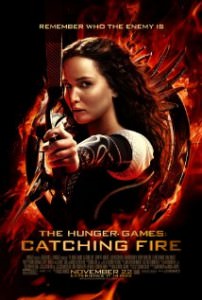 In the past 15 years reality television has grown to dominate prime time television because it’s cheaper to make than quality genre television. The Hunger Games takes our reality TV culture further, supposing a corrupt government with immense power subjugating its lower-class citizens who struggle to survive. The Capitol, the ruling caste and district, imposes the Hunger Games upon all of Panem (America in a dystopian future) after the districts rebelled against Capitol rule.

The Hunger Games is an annual reality TV show where teenagers and young adults fight to the death for the entertainment of the masses as in Roman circuses but also as a threat of retaliation should the districts rebel.

In the first Hunger Games movie, Katniss Everdeen (Jennifer Lawrence) volunteered to replace her sister Prim (Willow Shields) as a tribute (competitor) for the Hunger Games.

Katniss Everdeen and Peeta Mellark (Josh Hutcherson) jointly won last year’s Hunger Games when they outlived their competitors then threatened to eat poisoned berries together to foil the Capitol’s need for a victor. For the first time in the history of the games, there were two victors.

After leaving the arena in the Hunger Games, Katniss and Peeta discover they’re in serious danger because President Snow is angry. Katniss and Peeta perform to the cameras, pretending to be desperately in love. Peeta barely knows Katniss but he’s had a crush on her for years. Katniss will do anything to survive while feeling an attraction for both Peeta and Gale (Liam Hemsworth), another life-long friend.

Catching Fire opens with Peeta and Katniss estranged from one another, self-conscious because of their public charade. Katniss hunts for meat to support both her family and Gale’s family.

Upon arriving home, Katniss discovers not just her team waiting to prepare her for the victor’s tour but also President Snow. Snow tells Katniss of rebellion in the districts, warning her she has to convince him of her undying love for Peeta in order to survive and protect her family.

The tour does not go well.

Katniss is oblivious to her role as an icon for the rebellion in Catching Fire. She feels no Calling to be the Chosen One, a refreshing change. Instead, Katniss focuses on personal survival and keeping her loved ones safe.

The movie is fast-paced, character and action driven with good sound, excellent picture and special effects. Catching Fire the movie is an excellent interpretation of the novel. Although 146 minutes long, Catching Fire felt shorter.

There is controversy over the similarity of the plot of the Hunger Games to Japanese movie Battle Royale. Although there appear to be some similarities in the overarching plots, marked differences include detailed world-building and the targeted audience: Hunger Games is marketed for grades 6 to 8 while Battle Royale is R-rated. Catching Fire and Mockingjay are even more significantly different to Battle Royale’s conclusion and sequel. (Note: I’m not interested in watching a film as violent as Battle Royale so my information comes from Wikipedia.)

I believe any book that captures the imagination of thousands, even millions, like Suzanne Collins’s Hunger Games trilogy, is a good thing. This movie is an excellent interpretation of the book. I hope the movie format will encourage more people to read.

Overall, each of the Hunger Games novels is worthy of 4 out of 5 stars. Catching Fire has a well-deserved rating of 8.3 on IMDB.