“I don’t remember when I first started getting fan emails about The Hobbit game and began to realize the impact it had on so many people’s lives.” Veronika Megler, co-creator of The Hobbit game. 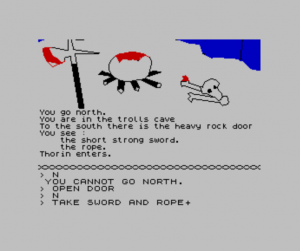 Over the next few weeks on Play it Again’s Popular Memory Archive the theme focus is on game fans and fan communities.

Fans have had a significant role to play in taking the initiative to document and preserve videogames – the software, the hardware they were played on, and the memories and experiences of first playing them.

Game fans understood the cultural value of video games long before universities and museums began addressing this issue. Operating outside institutional structures, fans have drawn on the combined knowledge of large communities to build a history of gaming that’s alive, dynamic and continues to grow.

Veronika Megler, co-designer of The Hobbit game, discusses how she learnt that her game was important to many players in the 1980s. She shares some stories of the games fans and her experiences making The Hobbit game.