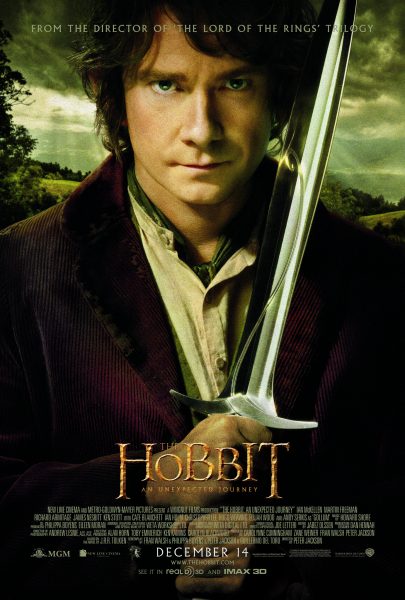 The Hobbit: An Unexpected Movie Journey

a movie review by Edward and Nalini Haynes

The Hobbit: An Unexpected Journey was first and foremost a novel for children by J R R Tolkien, much beloved by both of us. We heard the commentary when the movie came out so we sat down to watch this movie with low expectations. Nalini fell asleep half way through while Edward was disappointed with the entirety of the movie.  Edward was so offended he then pulled out our copy of the Hobbit to contrast the actual story with the movie.  If you don’t want spoilers, don’t read ahead, just accept we didn’t enjoy the movie, we feel the makers of this movie have been disrespectful to Tolkien and the movie is a B-grade recreation of Lord of the Rings with irrelevancies shoe-horned in to stretch the content to three movies; whatever this movie is, it is NOT a telling of the Hobbit.

The Hobbit opening segment is a brilliant example of what not to do in storytelling, masterfully breaking the golden rule regardless of the visual medium.  ‘Show don’t tell’ is the rule; Bilbo Baggins as narrator tells a story not his own, illustrated but not told by the cinematography, dragging on for far too long.  Well before the close of this segment Nalini was thinking about the rule, storytelling and wishing she had a stop-watch to time this piece of irrelevant muckery shoe-horned into a beloved story in a grab for money by stretching the story to three movies.

In the opening segment we started seeing scenes with Uruk-hai on wargs, another feature of LotR that was entirely absent from the original Hobbit story.  In the Hobbit the wolves worked with the goblins but not wargs with Uruk-hai. In the LotR world wargs and wolves, goblins and orcs might be interchangeable definitions but only the Uruk-hai, a special breed of orc developed by Saruman and Sauron in LotR, could go out in daylight. All other goblins and orcs were night-time creatures only. There were no Uruk-hai in the original Hobbit and nothing about an evil albino Uruk-hai on an evil albino warg chasing the expedition across the countryside.

Happy birthday to… Lord of the Rings?

The action then cut to the day of Bilbo’s birthday party that set the scene for Lord of the Rings.  Nalini’s first thought was ‘But this isn’t LotR, get with the program,’ her second thought, ‘Oh it’s nice that they’re referencing the LotR movies,’ and her third thought ‘No, it’s not nice, it fails because they’re off the story and the actors are too old.’  Attempting to portray characters as they were over ten years ago only emphasises the differences.  Frodo doesn’t look like Frodo anymore: his eyes are too small, his chin too pronounced and his features to harshly angular to be the sweet little hobbit.  Attempts to make the aging Ian Holm look as he did for the LotR movies were unsuccessful; he almost looks younger except for his mouth that just looked wrong, almost as if he’d had a stroke or something. We assume his mouth is more wrinkled and the excessive layers of makeup hindered his mouth movements as with a mask done poorly.

Cut to the scene where a younger Bilbo Baggins sits smoking outside his burrow, confronted by Gandalf.  This scene loses its potential comedic value simply because the timing and rhythm are off; it’s stretched to fill a time slot rather than short, sharp and funny storytelling.

Bilbo sits at supper to be confronted by the dwarves who tumble in one at a time then all at once except for Thorin who is late. Again the timing is off in this scene, missing its potential for comedy.  The movie lost Nalini before they left Bilbo’s burrow because it was long and tedious, then Gandalf doesn’t hurry Bilbo out the door as in the book.  Bilbo wakes to find his home empty, his life potentially returning to normal in spite of an empty pantry, so he picks up his contract, signs it and races after the dwarves.  No.

Instead of paying homage to the book, PJ pays homage to himself

In the novel the scene where the trolls capture the party is played for tension and for laughs.  The trolls plan to eat the dwarves while Bilbo looks on, hidden in a tree. While the trolls plan their feast Gandalf projects his voice from a hiding place in the woods, mimicking various trolls, causing strife leading to fights between the trolls. The night passes then morning sunlight turns the trolls to stone, allowing the expedition party to escape unharmed. Not so in the movie.  Although you’d think the original story would be sufficient to be used as source material for the movie, they cut out Gandalf’s voice throwing and the trolls fighting. Instead Bilbo delays the trolls’ feast by arguing about cooking methods before Gandalf uses his ‘you shall not pass’ move to split a rock, enabling the morning light to strike the trolls turning them to stone.

Radagast is in the Silmarillion. I’m confused.

Radagast appears, rescuing an echidna. He realises the echidna has been poisoned by dark magic and heals the echidna while the giant spiders in Mirkwood try to break in to his dwelling. Then Radagast races through the forest in his sled pulled by lots of rabbits.  In later segments Radagast discovers the fortress home of the necromancer responsible for the dark shadow over Mirkwood.  In the original novel the dark shadow over Mirkwood is mentioned as the reason Mirkwood is unsafe for travellers, which danger is later embodied by the giant spiders who attack the expedition party.  This revelation of dark magic in Mirkwood is the full extent that the Hobbit novel foreshadows the corruption revealed in LotR. Keep in mind that LotR was written many years after the Hobbit for Tolkien’s sons who were, by then, adults. In the movie Radagast uncovers a Morghul blade to deliver it to Rivendell so a council of – you guessed it – more characters from LotR who should not be in the Hobbit could confront Gandalf on his actions and motivations.  This is completely irrelevant to the plot of the Hobbit, additional story segments shoe-horned in to this story to help Peter Jackson relive his LotR glory days, remind people of the pinnacle of his career while milking the Hobbit story for every last possible cent.

When the wolves – without riders – accidentally come upon the expedition camped in the forest in the book, the expedition party climbs trees. Gandalf hurls fiery cones on the wolves, setting the forest alight. The goblins show up soon after, before the eagles come to investigate. The eagles rescue the party of their own volition. In the movie Gandalf summons the eagles using a butterfly like in the LotR movies without setting the forest alight; there are only spot fires.  Once the wargs and Uruk-hai attack in the movie, the enormous trees lose their root systems, falling like dominoes, until the expedition party is perched in a single tree fallen until almost horizontal above an exaggerated drop. Then the eagles rescue them. The fight scene before the rescue is ridiculous and entirely a fiction of the movie, not even hinted at in the book.

PJ did something right

The riddle scene with Gollum and Bilbo was done very well. After the riddle scene Gollum decides to put his ring on, can’t find it and falls into a murderous rage. Bilbo runs for his life, slips through a narrow space, falls and – lo and behold! – the ring flies up into the air, falling down directly onto Bilbo’s finger just like in the Prancing Pony in LotR. Another nod to the LotR movies that was never in the Hobbit novel. Sorry but we are not in Brie.

The beginning of the movie is so slow it felt like an overstretched cassette tape playing. In contrast the end of the movie was overly-fast paced, losing Tolkien’s careful counterpointing of action-relief-action, high-low-high that made the Hobbit novel such a success. The movie was way overdone, unnecessarily exaggerated to its detriment. Edward’s final comment – after I slept through half the movie – was that he believes Disney could have done a better job.