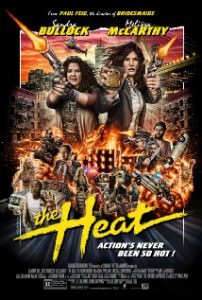 The Heat follows the adventures of Special (FBI) Agent Ashburn (Sandra Bullock) and Boston detective Mullins (Melissa McCarthy) as they hunt a ruthless drug lord known for cutting his victims into pieces. Written by Katie Dippold, a stand-up comedian with prior credits including MADtv and Parks and Recreation (7.0 and 8.5 out of 10 respectively on IMDB), I expected better.

Instead of bringing intelligence, insight and sass into a cop comedy starring two female leads, Dippold aims low: prejudice and mockery are Dippold’s flavours of choice.

Ashburn is a star agent who excels at her job but she’s obnoxious and arrogant, not a team player. Instead of mentoring Ashburn in team skills, her boss Hale (Demian Bichir) gives ‘feedback’ on her job performance in the run-up to a job selection process, telling Ashburn she will be passed over for the job.

Later we learn that Ashburn, a career-obsessed lonely woman, was raised in foster homes before a failed marriage. Now all Ashburn has is a cat – who belongs to the neighbour – and her job.

Mullins, the Boston police officer Ashburn will partner, is incompetent, abusive and a danger to everyone. Her only good features are a passion for her job and protecting her city; unfortunately this is communicated more effectively in dialogue than in the vaguely amusing scenes establishing Mullins’s character.

Mullins is overweight so Dippold exploits ‘fat humour’ for all the stereotypes: Mullins’s appearance, eating habits and general lifestyle scream ‘SLOB’. The only issue where Dippold plays with the stereotype is where the overweight woman is hotly pursued by men while the skinny chick is too repressed to enjoy her sexuality. [faceroll]

Queue the albino. Craig (Dan Bakkedahl) is a DEA agent who, upon arriving on the scene in an untimely manner without communicating with Boston PD or the FBI, is more obnoxious than Ashburn on a bad day. Obviously Dippold didn’t bother researching: she clearly has no understanding of albinism, an essential feature of which is BAD EYESIGHT. Perhaps if they’d cast a real albino they would have had a reality check. However Dippold uses Craig to recycle a lot of old misogynist ‘jokes’ and cruel jibes albinos hear at school every day. Dippold may have thought she was playing WITH the tropes but at the end of the day she played INTO the tropes.

The Bechdel Test is a simple gender-bias test giving a bare minimum of respect to women: to pass this test, a movie must have some dialogue between named women characters without a man present and the dialogue can’t be about a man. Although Ashburn and Mullins pursue men as perpetrators, there is plenty of dialogue not about men.

Sadly, The Heat plays into misogynistic stereotypes, significantly undermining the positive messages in the movie. Even when Ashburn rails against ‘the boys’ to their faces, telling them off for laughing at Mullins, cringe humour comes to the fore undermining Ashburn and her message.

The humour in The Heat lacks nuances and is devoid of layers. If you like onions, steer clear. Shallow farce with a lot of cringe humour is the flavour of the day.