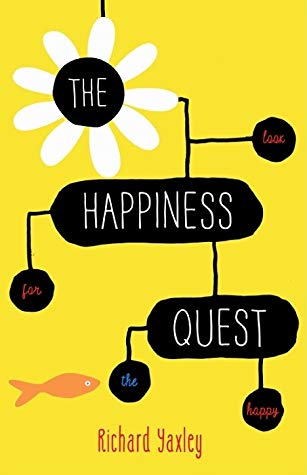 A commentary by Nalini Haynes

Tilley used to be happy or at least ‘average’ but now depression clouds her thoughts and days. Anxiety harangues her, fears of death, fears of decay haunt her. Macy, Tilley’s best friend, prescribes Tilley food and a dog (without asking before getting the dog) and demands that Tilley stop moping. Susan, Tilley’s mother, requires Tilley to be perfect or at least ‘normal’ in all things. As a result, Susan takes her to the doctor, to yoga, to the Happiness Clinic, trying to restore Tilley’s happiness.

Gilbert, the counsellor at the Happiness Clinic, sends Tilley on a quest to find what makes other people happy. His logic is that if Tilley learns what makes others happy then she can become happy herself.

I was gobsmacked when I read that Gilbert the counsellor advocates staring as a path to happiness.

… he told her how much better the world would be, how much more enlightened, if we were allowed to gaze uninterrupted at people’s various deformities — because we all have them, he said, otherwise we’d be perfect, and what or who is a perfect human? (p64).

These words are penned by a privileged individual who has never been objectified by staring nor has he researched the dynamics of staring.

Garland-Thomson (2009, p. 3) talks about the effects of staring. ‘Staring is an ocular response to what we don’t expect to see. … Mike Ervin calls it “the car wreck phenomenon” (2005 interview by Garland-Thomson) … So staring is an interrogative gesture that asks what’s going on and demands the story….’. In ‘Project Revision’, Rice et al. (2015) enlarge upon Garland-Thomson’s theme:

The history of disabled people in the Western world is in part the history of being on display, of being visually conspicuous while politically and socially erased. (GarlandThomson 2002, 56).

For more on this, see Snyder & Mitchell’s Cultural Locations of Disability. As a general rule, if you’re going to advocate staring at people as a cure for pathologising their difference, don’t. Unless you’re the person who has been pathologised as different and it’s your choice to promote yourself as a stare-ee.

After blithely recommending staring, Yaxley compounds his offence by reinforcing literary tropes about blindness. A minor character in The Happiness Quest, Mrs Cooper, was a talented artist until she suddenly became near-blind at the age of 31. From that time until her current old age, Mrs Cooper has apparently done nothing except sit upstairs above a room that holds her neglected paintings. She typifies the tropes of useless blind person waiting to die that David Bolt exposes with meticulous research in his book Metanarratives of Blindness. Mrs Cooper is also the tragic blind character who humanises Susan and teaches Tilley a lesson; Mrs Cooper has no agency, no life, beyond this. We are not your inspiration porn nor your tragic cripples to inspire you to live your lives to the full.

Entitlement as a … mental illness? WTF?!

Tilley’s grandfather died before she was born, leaving a legacy carried by Henry, Tilley’s father, and his sisters. Grandad was abusive and violent. Henry positions this not as toxic masculinity but as a mental illness that was neither diagnosed nor treated. He adds that the underlying cause was Grandad’s knees being damaged so he could no longer play sport. Under this logic, sportsmen who retire from professional sport, often at around age 30, are ‘entitled’ to be abusive because they fit the villainous angry cripple trope. Grandad apparently had no other love, could not be involved in sport in other ways and had no other life other than abusing his wife and children.

Loss of physical ability is inevitable as everyone ages. This loss does not cause mental illness. Such a loss can cause grief and require a reworking of one’s life. It seems to me that Yaxley is positioning superior entitlement and toxic masculinity as a mental illness, which plays into the ‘poor sad men’ trope that dominates media when a man — often a man who abused his family previously — murders his family. (Here’s an article about entitlement. Narrative therapy founder Michael White and others at the Dulwich Centre spoke and wrote about ‘superior entitlement’ as a form of toxic masculinity that was common in men who abused their families. I have the book — in storage, sigh — but I can’t find anything online about superior entitlement as such.)

Henry regrets not reconciling with his father and not healing the family before his father’s death. Although this is a nice idea, if Henry’s father had not shown evidence of genuine remorse and change before his death (the book does not mention it), then Henry taking responsibility for healing the relationship is utterly futile and self-destructive. Shouldering this responsibility is another form of codependency that is highly toxic.

Entitlement or a form of disability as a trigger and/or excuse for violence is highly inappropriate as a trope. At least Yaxley portrays it as a negative not an excuse. The Happiness Quest should also never have promoted abuse survivors’ codependency in any form, especially not by taking responsibility for the health and well-being of their abusers.

Susan, Tilley and Rosie’s mother, was an alcoholic who, when in a rage, pushed Rosie into a glass door. Rosie was scarred for life after that incident. This violent incident is mostly represented as a toxic family secret and an act Susan deeply regrets. It also appears Susan no longer drinks alcohol. However, there are three dangerous facets of this representation.

In the hospital Susan and Henry lied to cover up Susan’s violent act. This is represented as protecting the family. In this novel it kind of worked because Susan apparently miraculously never got drunk and was never violent again, although her relationship with Rosie was forever tarnished. However, in real life it’s more likely that, at very best, Susan would struggle with her addiction and her temper. At the best, Susan could be on an uphill (recovery) trajectory but would have slips both with drinking and with violence. Thus keeping this incident a secret was very dangerous. Putting this into a book aimed at teenagers could inspire others to play the codependent secret-keeper because this novel gives false hope, playing into real-world toxic family dynamics.

Susan ‘pushed’ Rosie into the door. It’s portrayed like a ‘simple’ shove that had unfortunate consequences. I walked into a glass door once and nearly knocked myself out cold but the glass did not break. Admittedly that was security glass and perhaps this glass door wasn’t as strong. However, to shove a child so hard into a door— a door that has to be strong enough to withstand some serious wear and tear — that the glass shatters is significant violence. This is where shit gets real and domestic violence needs to be seen for what it is. Also, Rosie couldn’t really remember what happened, had to be told and then she’s portrayed as the problem in her relationship with her mother. Hell no.

Henry takes responsibility for the violence, saying it is his fault and his responsibility as the father to fix this problem. NO. Hell no. And No. Fucking. Way. Susan and only Susan is responsible for her violence. Susan and only Susan is responsible for her addiction although Henry could make matters easier by not bringing alcohol into the house and avoiding alcohol when they are out together. Apart from simple supportive steps like that, Henry taking responsibility for Susan’s violence and addiction is codependency and should never be represented as positive in a young adult novel.

Rosie was deemed to be ‘damaged’ so Susan needed to replace her with Tilley, a daughter who had not been scarred. Words fail me.

The Happiness Quest is a short, simple novel for middle school readers and older to learn about depression and anxiety. Tilley’s state of being is somewhat normalised and yet not accepted. Her character arc is simple, with the novel ending on an upbeat note. This is both positive and negative. Readers tend to shun books with unhappy or indeterminate endings. Peeling the Onion suffered for its realistic ‘not happy’ ending (Dunn, 2014). The ending being upbeat will attract more readers. However, life does not have short character arcs with simple well-defined endings, so readers who identify with Tilley may feel they’re even more broken, that life for them is hopeless. Plus Yaxley represents codependency as a path to happiness, which is not appropriate, especially not for teenagers reading uncritically.

In contrast to my concerns about the above issues, I appreciated The Happiness Quest as a form of bibliotherapy reminding me of the principles of CBT (cognitive behavioural therapy) that help me in my struggle with depression and the trauma inflicted upon me by the University of Canberra. Tilley’s upbeat ending that relies so much on other characters doing what she wants and needs is problematic, as are all the codependency and disability issues enmeshed uncritically in the narrative. As such, I feel conflicted about this novel. I recommend this novel while strongly recommending critical discussion with readers.

Bolt, D. (2013). The Metanarrative of Blindness: A Re-reading of Twentieth-Century Anglophone Writing. University of Michigan Press.