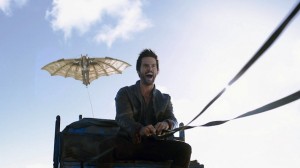 Leonardo Da Vinci is an arrogant young man, intent on furthering his own self-interests except when his self-interest means not aggravating his father. I guess one of Da Vinci’s Demons is his father. (Yes, I went there.)

Living in Florence, Da Vinci believes he is secure as long as he’s a ‘free thinker’ although the Medicis murder one of Florence’s key allies. In his ignorance, Leonardo pursues a woman he admires from afar, develops a clockwork bird for a key festival and risks the life and limb of his manservant to explore the possibilities of flight.

A Jew is hanged; his role as the Hanged Man becomes central to the story arc.

Meanwhile politics develop, with the power-brokers of Florence feeling threatened.

The awesome Alexander Siddig, formerly Doctor Bashir on Deep Space 9, is ‘the Turk’, a mystic who contacts Leonardo to teach him the way of the Book of Leaves. Some other actors were familiar from British drama but none as recognizable as Siddig.

Probably the only reality in Da Vinci’s Demons is the use of Da Vinci’s drawings as the basis for Leonardo’s creativity alongside some references to Italian politics. The Medicis were a powerful family. Italy was driven by factions and divided until relatively recently; some would say Italian politics is still divided.

Sumptuous costumes abound. Scenery focuses mostly on gorgeous historical buildings, all brought to the screen courtesy of green screen and CGI. The CGI artists in this series aren’t going to win awards; their lighting and color tends to be ‘off’, emphasizing the artificial nature of the backgrounds. However, I’d rather ‘okay’ sets featuring gorgeous historical backgrounds than no story, much like I’d rather Doctor Who pretending that 3 daleks can effectively surround a building in an era of low budgets instead of no Doctor Who. I’m okay with good story-telling coupled with ordinary SFX. Hell, I’m okay with an okay story coupled with okay SFX as long as it FEEDS MY SFF HABIT.

Da Vinci’s Demons uses the enigma that was Leonardo Da Vinci as the basis for a historical fantasy. The Hanged Man as the pilot is a good beginning, introducing Da Vinci the genius and arrogant young man, father issues, romance, mysticism, politics, intrigue and more. I’m curious.