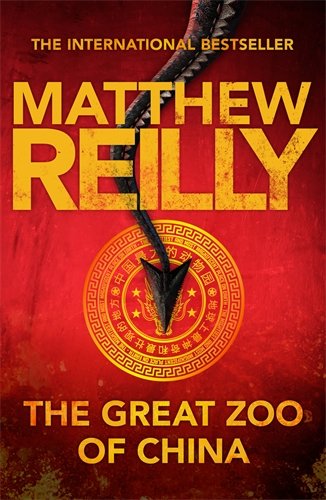 Roles were reversed: CJ brought a book to my house. She normally takes books away.

The problem is, I’ve had bits of review floating in my head so I’m going to put them down on paper. Or in 1s and 0s. To share.

The Great Zoo of China is Alien meets Jurassic Park with dragons.

Ripley — I mean CJ Cameron — is a herpetologist. She studies reptiles. After an accident where she was nearly killed by a croc, CJ works as a vet far, far away from crocodiles. I’m not sure why the National Geographic roped CJ, who currently works for the San Francisco Zoo, in as a reporter. I guess it’s because China asked specifically for her. After murdering her former boss and supervisor. As you do.

China wants to dominate the world. To be the world number one culturally as well as economically and technologically. They need something to usurp Disneyland. They figured a dragon zoo should do the trick. And, so far, there have only been 20 casualties. Including government-sanctioned murders to cover up dragon dietary habits.

What can go wrong? [innocent face]

The Great Zoo of China is 544 pages of splodey action with dragons and Chinese military fighting dragons and Chinese military fighting people because they’re never going to murder civilians in another cover-up, right? I mean, Tiananmen Square was just a blip on the radar of a cute and cuddly regime that has never before nor since committed atrocities, right? (If you can’t see the snark dripping off the page, google Tiananmen Square. From OUTSIDE of China.)

The plot is predictable and the tropes familiar — there’s even a cute kid with a Mickey Mouse hat who you know, you just know from the first time you meet her that Ripley [cough] CJ will rescue her — but this, my friends, this is epic awesome comfort food. This is literary double-chocolate with chocolate chips.

The prose isn’t fabulous. I’m no Literary snob but even I itched to edit some of the passages. I was distracted, imagining one of my tutors from last year saying in her Jewish-momma-from-Queens accent “I’m teaching you how to write commercial fiction… No. Never use an exclamation mark. Never.” There were several exclamation marks in the narration, not just in speech. While I personally have nothing against using a legitimate punctuation mark, some phrasing was lacklustre. However, The Great Zoo of China is a fun read: I zoomed through it yesterday, from beginning to end, then I had time left over to watch some West Wing. (What? It’s the last weekend of holidays.)

The Great Zoo of China is as hole-proof as a Bond or Indiana Jones film with even more action scenes. Zest is added with a smattering of pop-culture references: “It’s like walking into Mordor”.

Instead of making Jurassic Park 4: Jurassic World, I want The Great Zoo of China movie. Imagine the sets. Imagine CJ arriving at the zoo, seeing that spectacular scenery, a spire of a mountain with dragons circling their territory… Dragons lounging around a ruined castle… dropping fuel tankers on the administration building… taking out military helicopters…

Shut up and take my money.

The Great Zoo of China is not a fabulous work of literature. It is an action-packed splodey story with dragons.