The great debate took place on Friday night, right after Continuum’s opening and awards ceremony. Narelle Harris was the master of ceremonies. I am hoping to get the participants’ notes – well, the notes of those who actually prepared anyway – to post up later. In the meantime, meet the personalities involved…

The topic was ‘Public transport is more exciting than space travel,’ so I was quite surprised when Kathryn Phelps for the negative team, arguing that space travel is more exciting, was designated first speaker. Kathryn’s research was extensive, aided and abetted by hurling chocolates at the audience. After all, the team for the negative were up against the Guest of Honour imported from the US. Kathryn came across as learned and well-informed yet injected humour at key points.

Once Kathryn was out of time, she meekly sat back down.

Kathryn had stuff to say, and MAN DID SHE SAY IT. People even tried to physically wrest her off stage, all to no avail. Eventually Narelle Harris gave up and declared that she wanted to hear the rest of Kathryn’s speech anyway.

Kudos to Kathryn. Her speech was interesting, informative and entertaining but wrestling for control of the limelight was even more so.

Next up was George Ivanoff, first person for the affirmative. George was offered equal time to make up for Kathryn running overtime but declined; in point of fact George’s speech was so short that its brevity brought the debate back on schedule. He argued that public transport was more exciting than space travel but didn’t have an abundance of anecdotes. George largely relied on the unpredictability of public transport as a generator of excitement, comparing it unfavorably to space travel where they ‘plan the shit’ out of trips, with nothing unexpected.

Next up was Paul Collins, second speaker for the negative. Paul was well prepared, with notes that he didn’t get anywhere near through, but DAMN.

REBUT THE OTHER TEAM, PUH-LEAZE. I have two words to answer just about everything George said:

Seriously. They planned the shit out of that trip to the moon and So. Much. went wrong. Exciting? YES. And a good movie.

Paul’s arguments were well-thought out, intellectually beating the pants off the opposition.

Next up was N.K. Jemisin, second speaker for the affirmative, who admitted freely that she hadn’t prepared. Nora made a few points, each of which went through one ear and out the other. Later that weekend, Nora shared how she tries to deliberately get lost when she’s in strange cities. She gets on public transport, goes somewhere and tries to get lost because she has the best times when she is completely lost. Nora complained that Melbourne is too orderly so she didn’t manage it here.

AND SHE DIDN’T MENTION ANY OF THIS DURING HER SPEECH.

Come on, I’ve been catching public transport all my life. Hell, my parents hitch-hiked around Australia with me as a baby. I have LOTS of stories to tell. I could have argued for ALL THREE OF THE AFFIRMATIVE TEAM. I had even told Paul before the debate that the affirmative team had the advantage, but… sigh.

Nora is great. Just not great at debating public transport vs space travel.

Next up was Josh Kinal, aka the Suck Fairy as pictured here, standing as third speaker for the negative. This year, Josh redeemed himself from Suck-Fairy-dom. Josh’s speech was not for the faint of heart as it came with IMAGES of EXCITEMENT on public transport FOUND WITH GOOGLE SAFE SEARCH SWITCHED OFF.

Yes, there were GRATUITOUS PENISES (penii?); two of them, in fact, side by side on a train looking like they were comparing, bored and probably jerking off. This was Josh’s most memorable point, emphasising that these guys LOOKED BORED SHITLESS even though they had their ding-a-lings out and were playing with them. Josh had a structured speech with notes as well: have I mentioned how the team arguing the negative were really well-prepared, intelligent and WELL PREPARED?

Finally, Ian Mond sat as third speaker for the affirmative, and argued that going to sleep on what he calls the ‘Sleepy Bus’ is so exciting for him that public transport has to be more exciting than space travel.

He wasn’t trying to support the opposition.

The debate was awarded to Nora’s team. I would have given it to the negative team although I think the affirmative had MUCH more material with which to work; I wonder how often they catch public transport. The real winners were the audience, however, because the debate was the intellectual equivalent of a volleyball game. 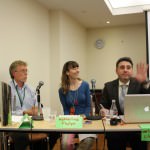 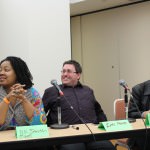 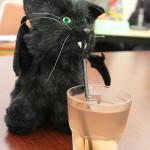 Edgar’s opinion is that the cocktail of the day – a lychee martini – is more exciting than travel.