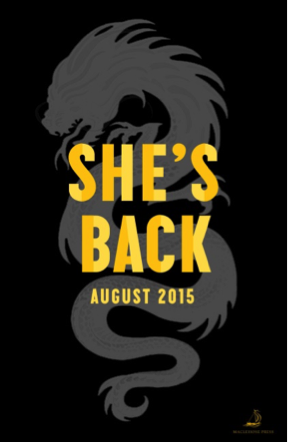 This much anticipated continuation to one of the best-loved crime series of the last decade will be published in Sweden as Det som inte dödar oss (What Doesn’t Kill You). The English-language title will differ, and is yet to be confirmed.

David Lagercrantz, the author of What Doesn’t Kill You, will be visiting the UK in the Spring as part of a seven-month build up to publication which MacLehose Press are aiming to make the event of the publishing year.

Publisher Christopher MacLehose said: “In one sense the chance to publish a new novel in the Millennium series merely underlines the sorrow of every one of his readers that Stieg Larsson could not have gone on to complete his planned ten-book oeuvre. But – and it is now almost a new and certainly fabled genre – the continuation by another hand has been long anticipated and David Lagercrantz will keep a very great storyteller’s flame alive. The MacLehose Press are delighted to help him to do that.

David Lagercrantz wrote I Am Zlatan Ibrahimovic, the prize-winning and bestselling “autobiography” of the Swedish football star Zlatan Ibrahimovic and is also the author of a brilliant novel of the life and death of Alan Turing entitled Fall Of Man In Wilmslow which we will publish in May of this year. Lagercrantz is simply an exceptional storyteller himself and his continuation of the Millennium series can be awaited by the millions of Stieg Larsson’s readers with confidence and great impatience.”

Lagercrantz is a Swedish journalist and author. His ghosted autobiography I am Zlatan Ibrahimovic was one of the most successful books in recent years, not only in Sweden but worldwide; it was shortlisted for the William Hill Sports Book of the Year Award and the prestigious August Prize.

Eva Gedin, the publisher of Norstedts, says: “We all felt that David Lagercrantz was perfectly suited for the task. He is an accomplished author who has created and written about complex and highly original characters throughout his career. We knew he would write this new Millennium novel in his own voice, while being faithful to the DNA of Stieg’s characters.”

Stieg Larsson’s family has been involved at every stage of the process. They wrote an agreement with David Lagercrantz for this novel and, given his bona fides, gave him creative latitude while working on the project:

“By letting David Lagercrantz write his own Millennium novel we keep the characters and the universe Stieg Larsson created alive.” Joakim and Erland Larsson, the Stieg Larsson Estate

David Lagercrantz says: “Stieg Larsson was a master at creating complex stories with a lot of different plotlines and that was something I was determined to live up to . . . [His writing style] is down to earth and unaffected. But there is a kind of journalistic authoritativeness about his work. I realised early on how idiotic it would be for me just to imitate him. This is my own prose.”

Stieg Larsson’s Millennium books have sold more than 80 million copies in 50 countries making it one of the most successful series of novels in modern times.

Publication worldwide will be on 27th August 2015, 10 years since Norstedts published Män som hatar kvinnor which in English was called The Girl with the Dragon Tattoo.