The German Midwife is a heartbreaking yet poignantly beautiful “what if” story. Anke is a German midwife who is in a Nazi work camp during World War Two. Anke is not Jewish but it is her beliefs about how all laboring women and newborn babies should be treated that lands her in Ravensbruck Concentration Camp. She is pulled from the camp and taken to Berghof to care for a pregnant Eva Braun, Hitler’s mistress. Anke struggles with doing the right thing…caring for Eva and her unborn child or helping the resistance.

“Confusion draped again like a thick fog, twisting the moral threads in my brain. I was supposed to feel dislike towards this woman, hatred even. She had danced with the devil, created, and was now nurturing, his child. And yet she appeared like any woman with a proud bump and dreams of cradling her newborn.”

I have read a lot of books centered around Hitler’s war against the Jews and I always think that at some point they will stop surprising me and drawing me in. I was therefore excited when this book got me hooked almost immediately. In fact I had some real trouble putting the book down….just ask my husband! I thought this novel had a fantastic thought provoking premise. It gave me food for thought on what could have happened if Eva Braun really had given birth to Hitler’s baby.

From harsh reality to “what if?”

The author was inspired by a real and despairing time in history – the second world war and the mass genocide that was waged against the Jewish people. She also uses her knowledge as a midwife to really bring the story to life. It seems to be very precise in regard to all things pregnancy and birth. The birthing scenes in the labor camp are so touching but the aftermath of the babies being born in a concentration camp is painfully raw. A stark reminder of how cruel and barbaric the Nazi regime was.

“…the ending of a life was ever close behind the giving of a new one….Mothers frequently found their babies stiff and lifeless come the morning. Other newborns starved slowly over the weeks ahead and only a handful lived beyond a month.”

I really liked the protagonist Anke. The snippets revealing her experiences in the camp were written so well that I felt emotional reading them. I felt Anke’s angst and sorrow. I believe it is a very real portrayal of what life would have been like for the female prisoners of Ravensbruck.

If you are looking for a story that is strictly factual then perhaps The German Midwife is not for you. However, if you have ever heard a piece of news or studied a period in history only to wonder “What if…” then you will surely appreciate this book. This is a book that I will not forget. I highly recommend it especially if you are interested in novels set in World War II Germany or historical fiction in general. A word of advice: have the tissues at the ready.

If you enjoy The German Midwife, you might enjoy Finding Eadie. 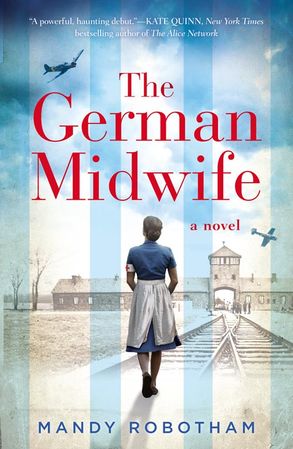