Art hides in the attic with several women but escapes through a trapdoor into a room above the attic. There she hides while the Witchfinder General’s men drag the women away, killing all except Art’s mother. Soldiers take Art’s mom to the Witchfinder General’s castle for ceremonial execution on the solstice. Riding her excellent horse, the peasant Art, dressed as a boy, sets off in hot pursuit. Through the forest of moon and sword, I guess.

After this somewhat mind-bending – melodramatic? – beginning, the story is a feminist read for primary children until the last third or so, which turns into outright melodrama that makes no sense. There’s an underground tunnel dug through the dirt that takes Art to the heights of the castle, a rope tied to a stone and thrown (?! ever tried tying a rope to a stone?) but not fastened, just held by the windowsill or something, creating a tightrope.

Then a tightrope walk between two towers (because plot) and a door to the dungeon in the bottom of a well. Apparently the water doesn’t drain from the well into the dungeon until the door opens. And yet it’s not magical.

It appears the author is passingly familiar with events like LadyHawke’s castle break-and-enter, and stories like the feminist Once And Future Witches and Good Omens but needs to re-read them.

Instead of working as a team with other women, Art follows a tortuous plot to rescue her mother. She leaves others to rescue all the other women.

Those rescues take place after a casual murdering of the Witchfinder General, whose corpse is promptly abandoned by his troops.

I would have loved The Forest of Moon and Sword in primary school although the “good” guys are somewhat casually murderous instead of resorting to justice. However, I feel that readers past primary school may be less than enthusiastic. The author, Amy Raphael, is a journalist with decades of experience, but it appears this is her debut children’s book, her debut fantasy novel and her debut historical fiction. Raphael should read widely, both good and bad fantasy, before embarking on another fantasy novel. Still, I give this novel 3 out of 5 for a feminist story very loosely based on historical events that will engage its target market.

Read this novel if you enjoyed The Boy, The Wolf and The Stars by Shivaun Plozza. 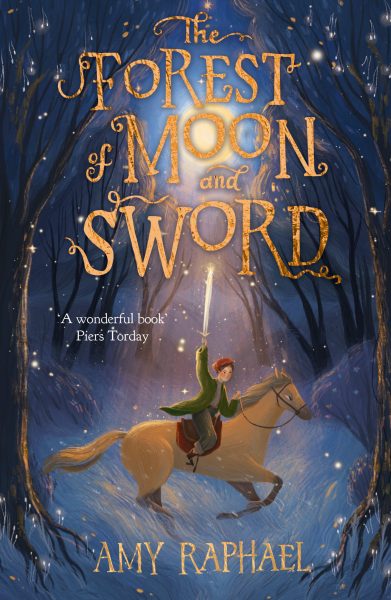