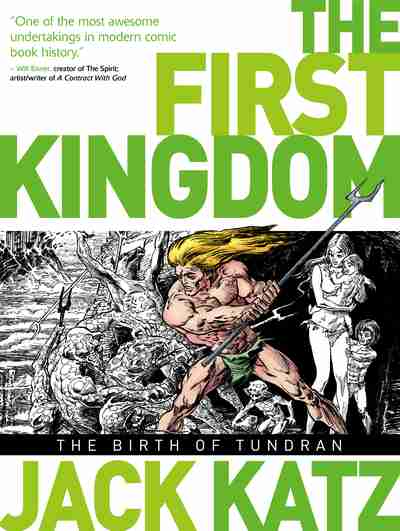 When originally given a collection of comics to review, I just knew I was in nerd heaven. Free comics to read and review. Some great, some decent and one that I just don’t know. Here we have the ‘I just don’t know’. Why you may be asking? Well, because after spending months reading this phone-book-sized hardcover, my thoughts and feelings are very much in the category of I just don’t know.

The First Kingdom takes place after the majority of the human race has been wiped out by some sort of apocalyptic event. The small number of humans that survived now hunt in groups on a planet that has mutated to inhabit both humans and strange creatures. The story mostly follows Darkenmoor as he leads his tribe of people to an area they can safely settle with food and shelter aplenty.

This is only scratching the surface of what The First Kingdom has to offer.

The First Kingdom originally saw its origins way back in the 1970s spread across 20+ issues over a period of many years. Because of that, Titan Comics decided to reprint the story with remastered art and reworded packaging with more content. From this, it quickly becomes evident its not written like current comic books.

I’ve been reading comics since the mid 1990s and have delved as far back as 1962 (Marvel Comics). So when it comes to style, I’m not one to be surprised. However, The First Kingdom is unlike anything I’ve read before. It isn’t dialogue heavy but, where it does contain words, it really packs it all in. This affects the panels that are otherwise cleanly laid out. The dialogue is easy to read but good luck determining who is saying what. We are given speech bubbles, but there are no arrows. Think of it like watching a film with subtitles but the actors aren’t moving their lips or emoting. This can really confuse the reader and, at major points, I was just skipping entire panels to bypass the words.

Now that may sound incredibly silly, but with such gorgeous and expressive art, the dialogue could’ve almost been entirely omitted and the story would’ve still been easy to follow. The art is very much Jack Kirby-inspired with strong powerful characters throughout the book. As mentioned above, the illustration is so powerful and clean, it tells the story all on its own.

All characters seem larger than life and the men are all packing a six pack. All women are super models and 95% of all women are drawn topless. I’m not joking here, The First Kingdom contains more nudity (both men and women) than your average Playboy. Unfortunately, as good as the art is, being in black and white the characters can often blend together, all beginning to look the same after a while. I know it would’ve gone against the original piece to include colour but even a slight addition I wouldn’t have been against.

Now for the big question. Is it worth your time? Yes and no. There is so much within The First Kingdom that it can appeal to anyone willing to give it a chance. It was enjoyable to ‘read’ and even better to look at, but the classic style and layout may put off some modern-day comic readers. Still, what we get here are hours worth of material. With this being Vol 1 of 6, be prepared for many days worth of reading ahead.