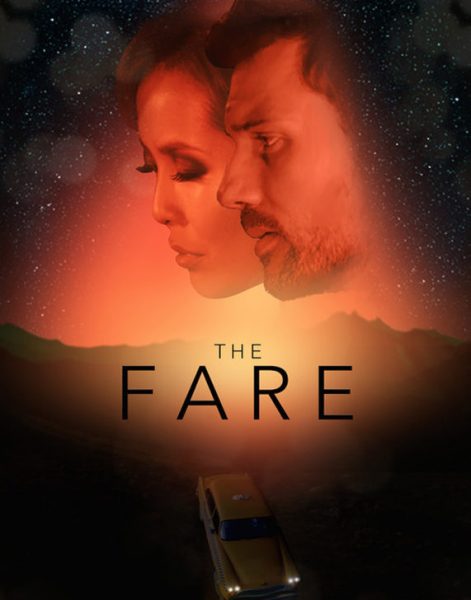 Opening: black and white. A taxi driver, Harris (Gino Anthony Pesi), is heading to pick up the fare in the middle of nowhere. It’s dark. A storm looms on the horizon. The fare is a beautiful woman, Penny (Brinna Kelly). Dressed to the nines, she looks like she’s very wealthy and attending a major function. They chat. She vanishes. I mean, SHE DISAPPEARS. Without opening the door. Dispatch tells the driver to reset his meter to vacant then drive back.

As soon as Harris resets the meter to ‘vacant’, he’s en route to pick up the fare. Again. Rinse, repeat. Until something changes…

The Fare plays off Groundhog Day tropes but with elegance and sophistication. There’s a mystery: why is this happening? I thought it was heading in a certain direction but the twist surprised me, increasing my love for this movie tenfold.

With a tiny cast and miniscule budget, The Fare relies on characters, dialogue and intelligent storytelling instead of SFX. I would rather 3 daleks surrounding a building with intelligent story than thousands of CGI daleks and Stephen Moffat as showrunner. Brinna Kelly is the new Russell T Davies. No, she’s BETTER. I recently watched Years and Years episodes 1 and 2, written by Davies. It was good but it had its flaws. The Fare is BRILLIANT.

The Fare and minority representation

Brinna Kelly is a Chinese Hungarian American, the screenwriter and the star of the movie. At no time does her character, Penny, experience racism in the movie. Nor is there any acknowledgement that she’s anything other than a desirable woman. The Fare assumes the audience has matured beyond racism, and it’s beautiful.

I avoid spoilers and trailers as much as possible so I can watch a movie with an open mind. Thus, The Fare’s opening scene, in stark black & white, is startling. The time loop is perplexing yet elegantly executed. At first, Penny and Harris’s dialogue is gentle but compelling. The cut to orange-hued colour is startling. By half-way, I was riveted, in love with both Penny and Harris. When the plot exceeded my expectations, I was stunned. And in love. The Fare is a riveting romantic mystery in the speculative fiction and literary genres, a masterclass in movie making and storytelling.

I’ve interviewed Brinna Kelly; this is an interview well worth your time. Watch this space!