Nick Bell writes really bad, incredibly cheesy fan fic putting himself – as Nathan Belen – as Shadow Star’s love interest. Shadow Star is one of the Extraordinaries who are superheroes and villains. Nick wants to be an Extraordinary superhero but he’s just a teen with ADHD and a super-sized crush on Shadow Star. Shadow Star’s nemesis is Pyro Storm, who also features in Nick’s stories.

Nick’s mom died in a bank robbery a couple of years ago. Nick and his dad are still coming to terms with her loss. Combine this with Dad’s shift work as a cop and Nick’s ADHD and their plates are full.

Baby butch Gibby, cheerleader Jazz and Seth are Nick’s best friends who all share a table in the cafeteria at school. Gibby and Jazz are a couple. Nick wishes they’d get a room and not display affection in public. (He’s so cute!)

Last year Nick had a relationship with Owen, a “poor little rich boy” who is, in fact, quite unlikeable. Nick excuses himself because of sexual attraction. But he still has to deal with the aftermath of this unwise affair and its impact on his friends.

Meanwhile, Shadow Star and Pyro Storm’s conflict intensifies in the skies over their city, threatening lives.

I do not have ADHD and cannot speak specifically for this condition. As a disabled person who has studied disability and activism, I think Klune represents ADHD respectfully and with complexity. The “disability gives this superpower” trope does NOT emerge through the story, for which Klune deserves applause.

The Extraordinaries is the literary equivalent of quadruple-cheese pizza with a cheese-filled base and extra-cheese crust. It’s like Shazam only funnier. Seriously, I was sitting in my lounge room CACKLING while people were walking upstairs past my door. I couldn’t help wondering if they thought I was on drugs or something. Laughing – couldn’t – stop – laughing.

And the fan fic! It was SO BAD and yet it worked so well with the story.

Nick’s mom’s death casts a shadow over their little family. Too often we expect people to get over a significant loss in a few days or a few weeks. I love books that blend realistic representation of grief with adventure and comedy: these books normalise grief and give hope.

Any book that can make me laugh half as much as The Extraordinaries deserves 5 stars. In my opinion, this novel deserves extra points for adding in good representation of disability and grief as well as complicated friendships and working through issues. I cannot recommend The Extraordinaries enough, as a hilarious escapist read and for bibliotherapy when working through issues as diverse as grief, failed romance and friendship conflicts.

If you’re interested in more Queer or LGBTQIA+ fiction, I think everything should be in this category. 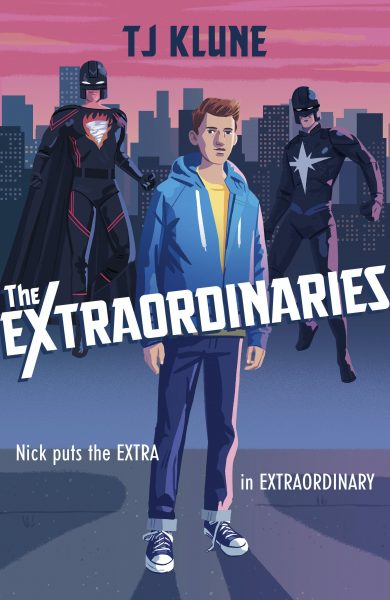