A witty, music-filled fairytale of heroes and villains.

A dragon has held sway over a cowering village for centuries, when a brave Lancelot arrives to vanquish the beast. The problem? The townsfolk have become quite fond of the tyrant and the impositions he makes … including the annual human sacrifice!

But don’t be fooled, there is more to this fairytale than meets the eye. Beneath the merriment lies a keen-witted exploration of political corruption and the perils of complacency. With Melbourne’s comic maestros Tripod bringing their iconic musical spoofery to the stage while playing the beast in question, and stellar performances from Jimi Bani (Mabo) and Kim Gyngell (Full Frontal), you won’t want to miss the laugh-until-you-ache hilarity of The Dragon.

Tripod is an Aussie trio of contemporary folk-singers who offer intelligent social commentary, spoofs and other dialogue in their music. I’ve never managed to make it to a live Tripod performance before so I lept at this opportunity. The Dragon is absolutely NOT to be confused with Tripod versus the Dragon, which is a different production. (Dragon trailer below.)

Walking in we discovered we were very close to the front row but to the extreme left of the theatre. At first I was concerned that we wouldn’t be able to see the action because of the stage set-up but their use of space took into account the audience seating.

The stage had a mechanised circular base that turned the platform so that all four(ish) sides could feature for swift scene changes. 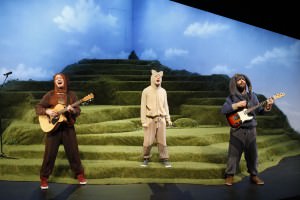 The Dragon photo by Jeff Busby featuring Tripod as animals

Pictured is one side of the stage. At the top of the hill is a door camouflaged in the sky; this leads to a balcony that doubles as an exit when the hill faces the audience. There is another floor-level door from the other side, the ‘building exterior’ side of the stage, which leads under the hill; when opened, it appears characters are emerging from or disappearing into a building. The varied angles of walls in the ‘external building’ side of the stage, scene changes emphasised with props like chairs or a microphone, all add a feeling of greater space and variety in a fairly simple set. This use of space was excellent.

The opening scene featured Tripod dressed as animals breaking the fourth wall, followed by Lancelot’s mellifluous tones featuring in a musical number, leaving me disappointed he didn’t join Tripod in more songs; the musical component of this drama was less than anticipated. Lancelot finds a hapless maiden about to be wed to a dragon, marriage being a euphemism for dying a gruesome death. The maiden does not wish to be rescued because she believes her sacrifice will save those she loves.

The Dragon meanders through, around and across the line between traditional fairy tale and subversion while offering sociopolitical commentary. While I enjoyed the show I felt that a stronger subversive thread would have resulted in a stronger story. It would have been easy for the maiden to metamorphose from  strength in self-sacrifice into a more constructive strength but alas, she falls in love in order to be rescued.

The Dragon fails the Bechdel test with only one female actor in the cast. Out of 17 members of the production team, only 4 (including the actor) were women. Kudos to whomever cast Lancelot (whom I believe is an Indigenous Australian), but more attention could have been paid to some degree of gender equity in casting and story.

Although less musical and less subversive than expected, The Dragon was an enjoyable night out, demonstrating excellent use of space, limited but creative use of special effects and good quality audio.