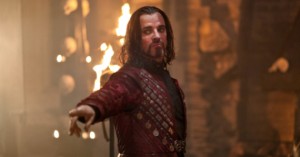 Warning: full frontal male nudity in the ‘zode discussed in this review.

Having humiliated the magistrate to avoid a conflagration, Leonardo da Vinci is on the loose once more. Never free of his demons, Leonardo finds himself on the road to free the Abyssinian.

Apparently the order concealing the Book of Leaves has NO imagination: Al-Rahim is ‘the Turk’ (Alexander Siddig) while Solomon Ogbai is ‘the Abyssinian’. Ogbia is played by Shaun Parkes who was also Zachary Cross Flane in Doctor Who ‘The Impossible Planet’ and ‘The Satan Pit’; no wonder he seemed familiar!

Did I mention Alexander Siddig has a cameo at the beginning of this episode? WANT MORE.

Time travel paradoxes abound as fantasy elements in Da Vinci’s Demons escalate. The River of Memory confuses Leonardo while Al-Rahim and his compatriots talk in riddles.

Anyhoo, off Leonardo and his sidekicks trot – would you believe their horses walk? – to visit a castle surrounded by impaled corpses. Ooo yeah, this week, instead of Botticelli jokes, we’re visiting VLAD THE IMPALER (Paul Rhys, Ivan in Being Human), the real-life inspiration for Dracula stories and the titular Devil. Horror fans will need to watch and rewatch this episode to soak up all the creative goodness, everything from a medieval candelabra made from human bones to a torture chamber that bears a horrific resemblance to the Vitruvian Man.

Meanwhile, Lorenzo de Medici and Piero da Vinci visit the Duke of Urbino (Vincent Riotta) to propose an alliance and a war. Negotiations take place in a sauna where only one man wears a towel. In these situations you might expect men to sit modestly and camera angles to conceal BUT NO. There is prancing and posturing galore. Not merely cheeks but full frontal views abound.

Federico da Montefeltro, Duke of Urbino, exhibits a rather large member, to which Lorenzo refers with a flick of his eyes and innuendo about being ‘blessed’, upon which da Montefeltro races to the other end of the sauna to squat while talking about taking a shit. At this point I choked with laughter: the duke appears to have extended his still-flaccid member. I suspect he may have been wearing a penis extension that came off, the gap concealed by his fist, apparently extending the length further still. If I am mistaken and we are seeing Riotta’s natural attributes, I’m surprised he hasn’t been offered irresistible sums to perform in – other – forms of entertainment.

Not satisfied, this boobless episode features even more dong as the Pope parades naked before an audience including Riario and Lucrezia. The absence of self-consciousness in the pope coupled with the embarrassment of his audience is hilarious, even while sinister plots are hatched.

I am absolutely convinced Da Vinci’s Demons writers have heard geek responses to HBO’s – particularly Game of Thrones‘s – bias in nudity (see below video). DVD (‘DVD’ is the acronym for this show; confusing much?) writers have come out swinging, braving the cold, exposing themselves for geeks of all persuasions.

‘The Devil’ is a fabulous combination of horror off-set with comedy while maintaining a story arc involving international politics, sex and relationships.

Below is a video response to HBO’s sexist nudity.