The Deluge is a CliFi (Climate Fiction) doorstopper at about 900 pages. Nearly the first 100 pages read like short stories, encounters with individuals, setting the stage for each. As the novel progresses, we return to these characters intermittently over decades.

The prelude introduces the research scientist whose book was a sensation, calling for change. However, his conduct at Davos motivated people to reject him and his prognostication.

A climate activist, Kate, floats around before really committing to action. Then she and a few others start Fierce Blue Fire, a peaceful protesting group. They publicly disavow violence while others use violence to send a message. Unfortunately, blowing up a power station right when people need their air conditioners to survive doesn’t win points with most people.

Others include a drug addict, randoms targeted to aid the climate action terror group and more.

The Deluge is a heavy read. It will be seen as prescient, like Margaret Atwood’s works, and for the same reason: the authors both extrapolated from previous events.

When I was in primary school teachers told us every great civilisation falls. I asked about the fall of ours. The teacher was, I think, shocked.

For the last decade or two I’ve watched contemporary empires crumbling. I’ve come to believe that our global human civilisation is failing, not just specific countries. Within the next 100 years, if humanity survives at all, it will be disparate pockets of people struggling against the damage we as a species have wrought.

The Deluge predicts a plausible path for this downfall. Big business, hell bent on profit over human and planetary health, controls governments.

Politicians are more concerned with their personal careers than the future of the planet. Either they don’t believe the end is nigh, they don’t believe it will affect them, or they assume some miraculous hail mary will save us at the last minute. The final episode of Henson’s Dinosaurs comes to mind: they all bunker down in their homes waiting for climate change – the ice age for the dinosaurs – to kill them all. Shocking but prescient, especially for a series made in the 90s.

The Deluge is not an easy read, with gaps of chapters between characters and gaps of years between “postcard” chapters. Each chapter began with me working to determine the focal character. One chapter ended with me convinced a focal character died. Then another chapter appeared to confirm it, only for that character to reappear.

Markley’s characters are paper cut outs performing the overarching story of the end of humanity, or at least the beginning of significant destruction and change. The political manoeuvring, lies and destruction would be shocking if we hadn’t seen that BS in the past 10 years in American politics. Overall, individuals are hard to care about in this story while Markley generates frustration and, hopefully, anger in the reader. Anything to motivate people to act in the real world!

The central character, the pivotal point about which I cared as a reader, was the planet, its inhabitants and the future more than individuals. For those with similar passions, this novel is unforgettable. The Deluge is prescient while holding a mirror to recent history. It’s an important novel but not an easy read. Five stars.

In a similar vein, I recommend a shorter but equally serious and well-researched novel, Water Knife by Paolo Bacigalupi. 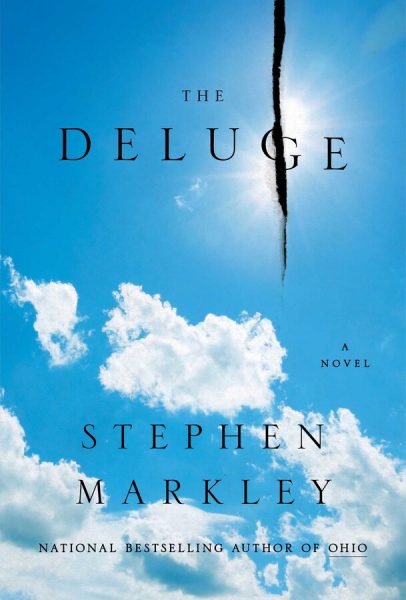