Henry is an orphan raised by an (unofficial) foster family who use his magical gift of reading any language to make money. He’s also a pickpocket who roams the streets with his foster cousins. However, tensions mount between the children. Meanwhile the foster mother Joan tries to protect Henry from her sister Agnes, who is an evil witch. And dreams of a dark lady haunt Henry.

Akala paints a picture of Elizabethan England: a dirty, smelly, racist country. As a Black boy, Henry is not unique but he stands out, especially with racism on the rise. In many ways, this novel is set now but without contemporary technology.

Hachette says Akala grew up in London. He is a BAFTA / MOBO award-winning hip hop artist, writer and social entrepreneur. In 2009, he co-founded The Hip-Hop Shakespeare Company, a music theatre production company that explores the social, cultural and linguistic parallels between William Shakespeare’s works and that of modern day rappers.

He has led many hip-hop Shakespeare youth arts, education and music projects across Europe, Asia, Africa, Australia and New Zealand.

Appearing on TV networks globally, he gained a reputation as one of the most dynamic and articulate talents in the UK. Especially with his bestselling memoir Natives, released in 2019.

Thus here is an author with a message and with skills and experience in delivery.

The Dark Lady, like much of Akala’s work, compares Shakespeare’s time with contemporary England. There are many parallels including the rising racism and poverty. And calls to deport people who aren’t white, regardless of how long their families have lived in England.

Although Henry uses the services of a sex worker, sex is not explicit. By the time children are in middle school they should be aware of how babies are made and that sex can be enjoyable. For a book that appears aimed at middle school and high schoolers I would like some kind of safe sex message, which is conspicuous by its absence. And yet I can’t think of a suitable Elizabethan way of discussing safe sex. At least Henry’s sex is completely consensual.

Henry’s rivalry and outsider status engaged me as a reader from the outset. His journey is incredible but then so are his magic powers.

At first the black pages with white ink that – I think – describe Henry’s dreams were disconcerting. They didn’t seem to fit with the story. Eventually I realized they were either Henry’s dreams or linked to the dreams.

Akala weaves in historical figures including William Shakespeare himself, who is Henry’s idol. Henry writes poetry, even scrawling verse on the walls during his stint as a prisoner in a dungeon. All Henry’s sonnets are inscribed within the novel, often in the standard font and inset in italics as well.

Henry faces challenges and learns a lot about himself and those around him. I confess the melodramatic climax put me off somewhat, especially Henry’s sudden onset of naivety. However, considering the target age group, I’m probably overthinking it. The ending is either a new beginning or a cliffhanger for a sequel, I’m not sure which.

I recommend The Dark Lady to middle schoolers, high schoolers and those who enjoy somewhat melodramatic fantasy. 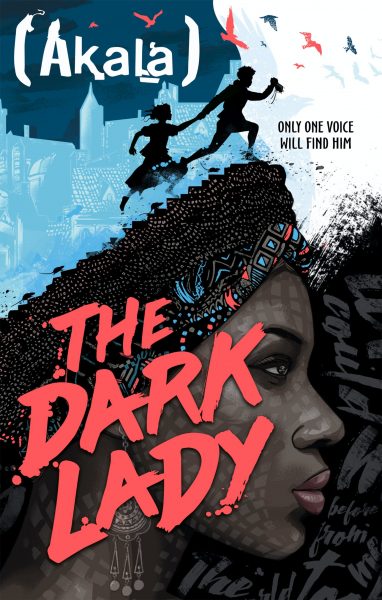