LaRynne is a train wreck, returning to the “scene of the crime” because she inherited half an apartment that she needs to sell. Deacon is her ex from her teen years. Something happened way back then, which remains rather vague despite being pivotal to this entire story. Suffice to say, they broke up and LaRynne never returned to visit her grandmother. Ever. And now her grandmother is dead. Thus begins the coop.

LaRynne has the money to cover renovations but the terms of the will are that she must marry to access it. Why? Because plot. Deacon has the skills to renovate but not the money. So they team up, get married, and start work.

Anyone who’s done renos (renovations) knows the pain. Also renovations significantly increase the likelihood of relationship breakdown, even more than covid lockdowns. So this couple carrying weighty baggage while avoiding the past inevitably head for confrontation.

From cleaning the toilet with a toothbrush then telling the toothbrush owner to be sure to brush their teeth well, to therapeutic smashing, we’ve seen these tropes before. They’re still enjoyable.

LaRynn and Deacon confront their demons – kind of. Even when they’re coming to terms with their past, the story is vague on what happened. I wondered if the author had a similar experience so just couldn’t quite nail it on the page. We have enough information to connect dots but no visceral scene.

It’s been a week and a few books since I read The CoOp but I’m pretty sure this was one of the few novels with safe sex via condom usage. Still, using a condom can be sexy, it can heighten sexual tension. It would be good to see that on the page instead of just “he put it on”. Disappointingly, there was no prophylactic use for oral sex. Speaking as a former counsellor who advocates for safe sex.

Dewitt nails the sexual tension alongside some raunchy sex scenes modelling good sex, so I’m here for that.

The CoOp felt slightly slippery to me. I enjoyed it enough to purchase another of Dewitt’s books because I need a break right now. No more stories with abuse (kThanksGo, although women getting revenge is always good), and Dewitt obliges. However, I wasn’t convinced by a few elements that felt rather “because plot”. If you’re looking for a romantic comedy with heart and an emotional journey, The CoOp fits the bill.

Addendum: I’m not usually a fan of uberwealthy people living “aspirational” lifestyles so this story, where LaRynn has an inheritance but needs a job and must learn to budget and live like a “real” person, has added zest in my opinion.

If you enjoy Tarah’s books, you will love Sister of the Bollywood Bride and The Wedding Crasher.

Note: Tarah Dewitt doesn’t seem to have a website although she seems to be self-publishing. She has merch here and her books are available in places like Amazon. 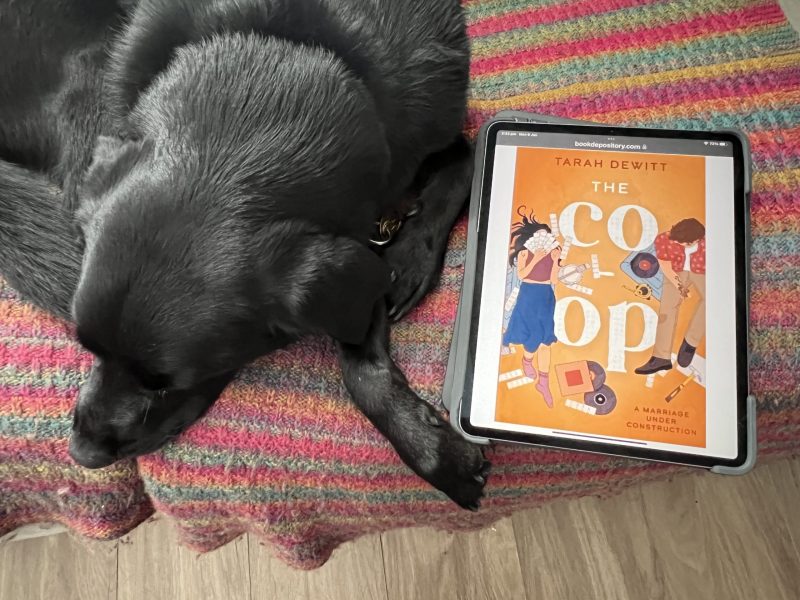 the CoOp: A black labrador retriever chills on the couch after we enjoyed the CoOp together. The CoOp cover features a man, a woman, swatches and vinyl records.