The full title of this 20th anniversary edition is The comical tragedy or tragical comedy of Mr Punch. My review copy is larger than normal letter size with a soft glossy full color cover and satin full color pages. The creators’ photos inside the back cover are probably from the era of the original publication but their bios are current. Some of the extras include images from a CD-ROM (remember them? Not included with the book, however) and sketches from early storyboarding are in the back as well (storyboarding as opposed to waterboarding; although this story has much violence, no one is waterboarded).

Mr Punch reads like an adult’s memoir of a period during his childhood relating to a dysfunctional family and putting the pieces together later. The story revolves around Punch and Judy shows, the puppeteers, a sideshow manager (the protagonist’s grandfather) and related people as seen from a child’s perspective, mostly during a seaside ‘holiday’ while waiting for the protagonist’s sister to be born. I don’t think the protagonist’s name is ever mentioned and his character looks a lot like Neil Gaiman; perhaps it’s autobiographical?

The art is exquisite: a combination of almost Picasso-like imagery in the protagonist’s features, pen and ink sketches of other characters, paintings of others and photographs both straight and photoshopped. Images include found objects, photos with overlays and other forms of photography, some in a palimpsest style (although obviously printed in the book).

I have read many books about puppet shows, including Punch and Judy. One particular story haunts me still although I only remember an image at the end; I felt that the novel I remember influenced this story.

The first time I remember seeing a real Punch and Judy show was at a hospital’s Christmas function for children after my son had several operations that year. I was horrified by the content of that puppet show and, even then, the children weren’t as enthusiastic about that performance as many other features of that celebration. I felt then, as now, that Punch and Judy is not for children.

In the last few pages of Mr Punch there are a few paragraphs in tiny font so poorly printed that, when I magnified them, they pixilated beyond recognition. I could only barely interpret some of what was said, which appeared to be a rant against do-gooder activists trying to clean up children’s entertainment so they won’t see puppet shows where evil puppets beat their wives and children before murdering everyone, then defeating the devil to go on and do whatever they want.

Mr Punch is, to me, a horror story as the Punch and Judy show is incorporated within the childhood memories of an adult survivor of domestic abuse (even witnessing others being abused is a form of abuse to a child because threat is inherit in other-directed violence). That adult survivor is trying to piece together his own story, the story that includes an extended family whose reaction to anything untoward is to cover up or ‘forget’. In this, the story is eminently relatable. 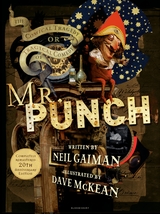