A brief commentary with spoilers by Nalini Haynes

This is the episode where Wildlings climb the wall because, when the weather is cold and snowy outside, a little gentle exercise is just the thing to keep you warm.

But first Bran mediates conflict between Osha and Meera who are as irritating as bickering children.

Sam sings to Gilly and the baby just in case the White Walkers didn’t know where to find them. The camera angles imply someone is watching them. I anticipate the Other from the books to appear. I am disappointed.

Arya is the only one smart enough to see through Melisandre: when she says she doesn’t like the Red Woman, the men laugh and say it’s because she’s a girl while they drool. Yeah, because she’s not thinking with her dick, she sees Melisandre for who she is.

Melisandre collects Gendry from the Brotherhood, who accept gold for betraying him. I thought it was supposed to be 30 pieces of silver not a bag of gold.

Ramsay Snow tortures Theon Greyjoy as time filler and to add the requisite amount of gore to this episode. I didn’t like this portion of the books so I skim-read FAST. I loathe these scenes in the series, which only serve to emphasise the soapie nature of Game of Thrones even if it is darker and a lot more compelling than daytime soapies.

Roose (Pages kept changing it to ‘Rose’!) says he’ll let Jaime go but says Brienne has to be held for treason. So her reward for obeying Catelyn Stark is to be executed? Charming. Not yet, though.

Rob Stark meets with some of the Freys who put Lord Frey’s demands before him, which include Edmund Tully marrying one of his daughters. This time it’s to be a short engagement. I hear wedding bells. I wonder what color people will wear to this wedding?

One controlling abusive parent to rule them all. Cercei and Tyrion discuss Tywin’s plans for them. For once the siblings seem to dislike each other less.

Sansa dreams of wearing green and gold when she marries Loras because she loves pretty things. This is also why she can’t see the goodness in Tyrion. I’m going to want to SMACK her during the next few episodes.

The Wildlings and Jon Snow climb that 700-ft wall of ice without anyone belaying them.  That creepy guy who hates Jon Snow tries to do a Hamish Macbeth on their asses (cut the rope when the ice slides away underneath Jon Snow and Ygritte) but Jon Snow swings wide, digs in deep and saves them both.

At the top of the world, Ygritte and Jon do their Titanic impersonation — without the music or the boat and with slightly colder water. The scenery is pretty though.

Game of Thrones implies might is right, beauty is desirable at any price, butts and boobs are for visual consumption but are more likely to appear if they are female. Pity the series is so compelling; it’d be easier to be self-righteously critical if I didn’t enjoy it so much. 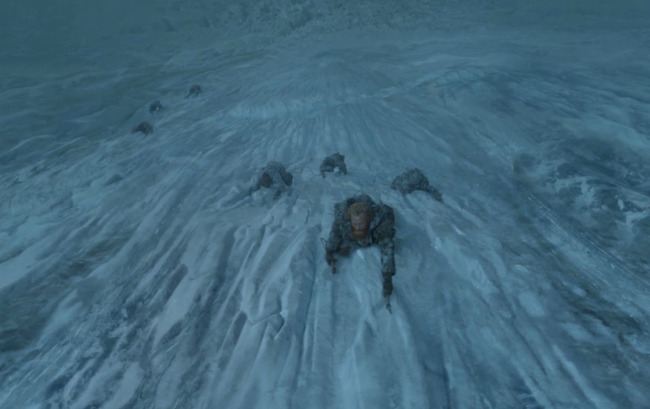