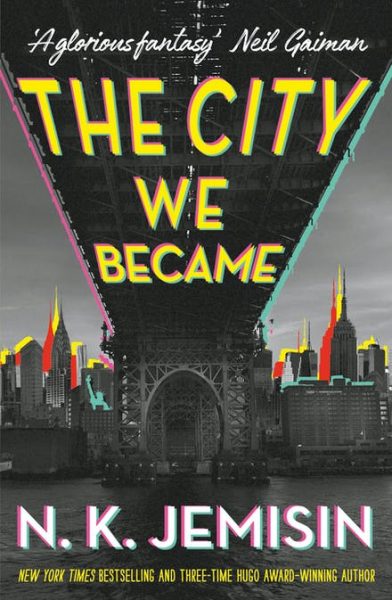 New York just woke up. More precisely, 6 people just assumed aspects of and became personifications of New York City as a whole and its boroughs separately. The only problem is, none of them know what is going on. Nor do they know who the others are or how to find them. Oh, and someone from another dimension is trying to kill them.

A skinny, hungry, young adult paints throats to help the city breathe. Sao Paulo seeks him out, mentoring him. He believes Paulo wants sex and – for a meal and a roof over his head – he’s prepared.

An inter-dimensional rift destroys the Williams town bridge. I don’t think I have the name right. It destroys a New York bridge.

Another manifestation of space-monsters attacks people on the FDR, an arterial route through the city. So a newcomer, Manny, climbs onto the roof of a checker cab to joust with it. As you do.

Gradually the cast expands as we meet the boroughs who are wandering, lost, but learning fast. The only problem is their enemy is ahead of them. And she’s playing for keeps. Bronca is the shit-kicking artist with the shit-kicker boots. Brooklyn is gentrified. Queens is an illegal immigrant. Aislyn, Staten Island, is a white woman who’s a victim of domestic violence. She tries to flee. Her own neuroses overwhelm her so she returns to her abusive father and alcoholic mother instead. Time is running out…

Jemisin’s characters and plot are engaging. Her fundamental premise results in another feeling of deja vu, similar to that I felt when reading Trudi Canavan’s Black Magician series. I checked the dates: there’s no way I’d read Canavan’s series previously and yet I knew the blank spot on the map held a women’s refuge colony. To this day I do not know if Canavan’s series simply triggered memories of the considerable amount of previous reading I’d done or if I simply anticipated an inevitable outcome. Likewise with Jemisin’s The City We Became: while unique and compelling, this concept of cities’ avatars feels incredibly familiar although I cannot point to any specific stories.

The familiarity of both series makes them excellent ‘comfort reads’ during this time of unprecedented crisis, so bear them in mind while you’re looking for escape.

N K Jemisin is known for her racist writing: by that, I mean how she challenges racism in her novels. As an African American author, she’s risen to the challenge, only to be denigrated by white supremacists whose online rants were deeply shocking. In this novel she also engages with the topic of racism, the benefits of bone-deep multiculturalism, not merely the ‘tolerance’ that Hugh Mackay dismisses as inauthentic.

However, the outworking of Jemisin’s anti-racism theme has, yet again, adversely impacted on people with albinism.

By making the evil WHITE, supernaturally white, Jemisin has inadvertently excused all normative whites of guilt. The alien tentacles are white. The personification of the villain is, at first, the White Woman then the Woman In White.

Jemisin appears to place the burden of guilt on a group of people already considered alien, strange, suspicious etc, and who already suffer discrimination. Furthermore, by making the white supremacists supernaturally white with supernaturally white alien entities manipulating them when they do their worst deeds, real white supremacists are let off the hook. Largely. At least Jemisin does acknowledge that the alien is only manipulating preexisting tendencies. For more on this topic, there’s this draft literature review on representations of albinism.

Furthermore, New York City’s racial demographics are 42% white, with the other 58% of various backgrounds. This means that making only one out of 5 boroughs white is non-representational and problematic. It seems that “all white people” are racist, selfish and evil. I understand Jemisin’s need to write coloreds for colored audiences who have too infrequently seen themselves represented well. However, by making the villains extranormatively white, Jemisin has vilified people with albinism from all races. Why can’t the evil things be blue or purple, or some color that is never associated with any human race?

One very minor character is disabled. One of the boroughs’ fathers is in a wheelchair. That family made their brownstone wheelchair-accessible before the city’s ordinances protected buildings against disabled people.

(This is a real thing in the USA: neighbors object to disability access modifications. I’ve read that some people haven’t been able to move in to homes they purchased but I can’t find links. Here’s a link where neighbors sued over an installation they think will lower property values.)

The wheelchair user character in this novel is a minor character. He’s an object to be moved when under threat. At the end, there’s a scene with a lot of friends and family but he’s absent. Combine this with the implication that extra-normative white people (people with albinism) are evil, and representation of disability is not positive in The City We Became.

The City We Became is part Neverwhere, part Lady In The Water, part … I cannot think what stories include geographical avatars but I know I’ve read this trope before! I love the Lady In The Water themes requiring learning, teaming up to save the day, overcoming obstacles and getting over each other. Although Gaiman didn’t invent these tropes, The City We Became is like Neverwhere for ‘mundanes’ not seeing the truth, a secret underworld, interesting and ambiguous characters, etcetera. This novel is a fun escapist read harking back to those days so long ago when social distancing and lockdown were unknown.