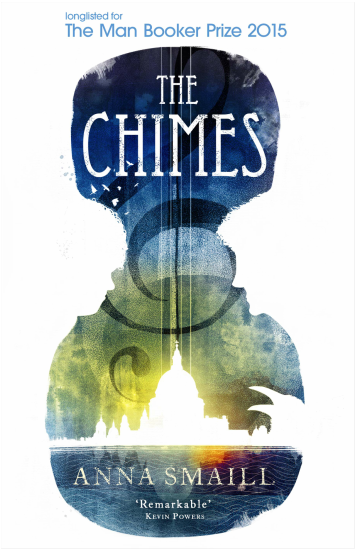 The Chimes is a post-apocalyptic dystopian novel with some tremendous differences, including a music-based language where memory and the written word is heresy.

Simon is travelling to London. A man in a cart gives Simon a lift, warning Simon to keep his memories close (a bag of objects that trigger associated memories) and telling Simon to get a job as a prentiss quickly so he doesn’t become memory-lost.

Simon is attacked by some youths down by the river, who end up taking him in and embracing him as part of their gang, called a pact. They “run”, seeking a particular mettle (metal) buried in pieces in the Thames after the cataclysm that broke their world.

Gradually the world structure is revealed, including an underground movement Simon repeatedly tries to contact.

There are apparent breaks in the story; these breaks are breaks in Simon’s memory.

Smaill uses very little exposition while composing this symphony. Sometimes her prose is lyrical, sometimes it’s a bit like reading music theory as adjectives and adverbs tend to be musical terms like ‘presto’ and ‘forte’.

Simon can’t keep his eyes off Lucien, the leader of their group of pact runners. On the one hand I don’t want to include spoilers, on the other hand: queer romance. Awww.

Lucien is an albino: he has pale hair, pale skin and he’s blind, especially blinded by bright lights. The only aspect Smaill hasn’t perfected is that Lucien sees better at night; in actual fact, darkness is as inhibiting of vision for persons with albinism as bright lights. Personally, I find somewhere in the middle — like a cloudy day — is the ideal lighting condition creating best vision. However, even with ideal lighting, I have very poor eyesight as would Lucien.

However, Smaill makes much of Lucien “seeing by hearing”. This is an ability some people have in real life. Someone from Vision Australia told me about a guy who’s legally blind whose hearing is so sophisticated he can click and use echolocation like a dolphin to ride a bike without a seeing pilot. Therefore Lucien’s ability to “see” with his ears, especially in familiar locations, is plausible. In a familiar location most people wouldn’t know I’m vision impaired — unless they’re above-average observant. Lucien walking around with sunnies to protect his eyes and no cane is entirely plausible.

Lucien is depicted as a strong character, a leader. Simon is attracted to him from the beginning. There’s no pity here, no sense of Lucien as a lesser person.

Then we meet the deaf girl. Simon fleetingly feels pity for her but he observes her abilities, her interest in her surroundings, and he contemplates the advantages that being deaf give her. Smaill’s depiction of these sensory-impaired characters totally rocks.

The Chimes is fairly short at 289 pages (for my ARC). Characters are exploring, asking themselves questions, learning about themselves and their world then setting out on a mission. The plot is well-paced with good characters.

I want The Chimes, like Alastair Reynolds’s Terminal World, to be a stand-alone novel where the reader can relish the climax, the dénouement and then ponder and “write” the future, although I would read a sequel. The Chimes is a strong story and an excellent debut novel with disability and queer themes.