Prison warden Grace Slanter receives a phone call telling her a bus full of security guards’ family members is a mile away in the Nevada desert. A sniper is ready to fire after already killing the bus driver. While Grace grapples with the phone call, at first fumbling then engaging with planned procedure, the entire prison hears the phone call broadcast over the PA. Security guards release the prisoners. All of them, even the serial killers and rapists. The chase is on.

Captain Celine Osbourne fights to keep the death row inmates inside but one of her subordinates pushes her out a door and locks it while he releases the prisoners. All her subordinates then leave her alone in their office. A prisoner decides she’s the nearest rape-and-murder target but finds she’s not such an easy target.

US Marshal Trinity Parker is herself a violent controlling sociopath sent to hunt down the escapees. She’s not shy in dishing out verbal and even physical abuse to prison staff.

And the men… all the various men who escape, they all have stories and take different paths.

I have certain expectations of “Fugitive” trope stories. However, Fox confounded my expectations. The Chase is an adrenaline rush from beginning to end, largely because Fox briefly sketches even minor characters, giving them a story, making them real. This builds urgency and raises the stakes for every encounter. And the most significant character, Celine, is the most complex person of all with a backstory that shaped her life. Inmate John Kradle and Willie Keeps are also complex, as are Celine’s relationships with them.

Although the prisoners themselves may not be the sharpest tools in the shed – they are in prison after all – many have outside connections. And it’s those connections that set them free. One escapee in particular is a celebrity hungry for more. These people worry me not because they’re fiction but because they’re too close to reality. Then Rittenhouse was found not guilty. And I worry even more. Fox took real issues, real social dynamics, and depict their fictionalized counterparts with realism. The result is chilling.

The Chase is also, occasionally, FUNNY. One scene in particular I recall so vividly now that I can almost see it as if I was there. That scene made me laugh out loud and cheer. I may have even, literally, raised my fist in celebration while reading. Fox is a master of her genre. 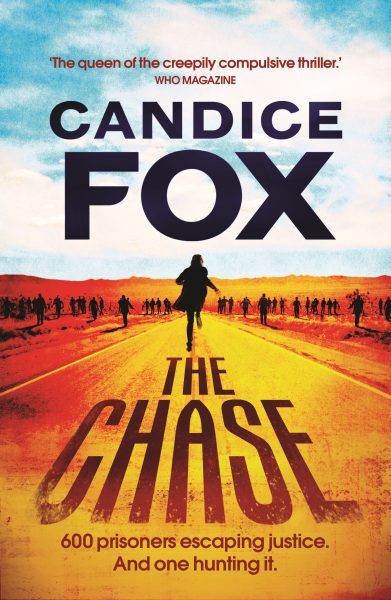