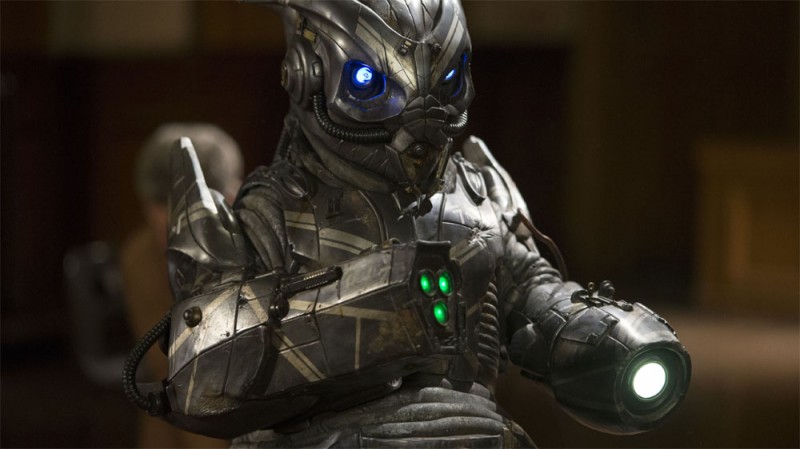 The Doctor shows up for what seems to be a weekly date with Clara only to tell her that he’s going deep undercover so he’s too busy this week. Then he shows up at her school as the caretaker. Where Clara works. Where Clara’s mysterious boyfriend works, the one who the Doctor hasn’t met yet.

There’s a monster hiding in a building near Coal Hill School that the Doctor has to defeat. Of course Danny foils the Doctor’s brilliant scheme — queue more father–boyfriend conflict — so the Doctor finds another way to terminate the terminator/transformer/Johnny 5 mashup. Very little time or effort was put into building tension with this element of the plot. Because Doctor Who is all about Clara.

‘The Caretaker’ is an episode about the Doctor meeting Clara’s boyfriend Danny; this zode will mostly appeal to families who can identify with the humour around the Big Introduction.

There’s also teacher humour and parent-teacher humour as well as a ‘disruptive influence’ by the name of Courtney Woods (Ellis George); I quite liked Courtney but thought she was too ‘TA-DAA’ and either superfluous or under-utilized; I’m not sure which. By ‘ta-daa’ I mean she came on set like a future companion; you know how it was in Classic Who: the new companion stuck out like a sore thumb in the story, even for those of us who weren’t privy to insider knowledge. These days we know of any changes in the Doctor and companions several months in advance, removing all doubt, surprise and tension concerning their welfare. This made Courtney even more puzzling.

The denouement features an overly long Danny–Clara cuddle and D&M (deep and meaningful discussion). However, I thought there was some validity to Clara and Danny’s discussion of being pushed and the difference between being pushed to succeed, to exceed your expectations for yourself, and being pushed over the edge. Also, and very important to relationships, are Danny’s comments about what lies people tell. Clara’s motivations for lying to Danny are unclear but she does it anyway.

The final scene shows the dead policeman (killed early in the episode) in ‘heaven’. This season’s ‘story arc’ is, so far, both annoying and nonsensical.

Moffat seems to have a thing. ‘The Doctor’ is a time-honoured title but Moffat seems intent on changing him into “The Caretaker” (see Matt Smith’s walk through the wardrobe. Or the Christmas decoration. Whatever.) In the last episode we had “The Teller”. Orly? I guess Moffat is trying to make his mark before he leaves. Something to be remembered by, as if fans will ever forget.

In a 45 minute episode that includes intro, the next episode’s trailer and the credits, Moffat’s long denouements are slowing stories down, changing Doctor Who from an exciting science fiction adventure or detective series into a more mundane soapie. Couldn’t they manage a few more minutes of plot for each episode? Preferably 5 to 15 more minutes of plot, please. (Just in case the BBC hears my pleas for mercy.)

‘The Caretaker’ is your weekly reminder that Doctor Who is now about family, relationships and, most of all, about Clara. When did Doctor Who turn in to a YA romance–soapie? Sigh.