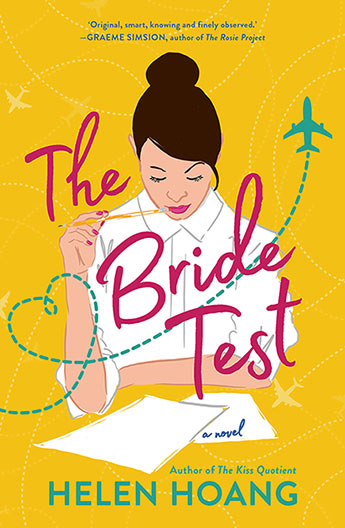 Khai is Vietnamese American with a large extended family. After his cousin died as a teenager, Khai is convinced he is broken, with a heart of stone and unable to love because his grief doesn’t meet others’ expectations. He isolates himself, avoiding using the phone (he learned of the accident by phone), and having little to do others socially. Khai’s mother, Co Nga, decides to find Khai a wife so she visits Viet Nam to interview women, hence the title The Bride Test.

My is cleaning the bathroom in a posh hotel when she sees the rejected women crying. Then she meets Co Nga, who decides My is right for her son.

My grew up in poverty, living with her mother and grandmother. Although they had expectations of her, she couldn’t fulfil them after she became accidentally pregnant. She dropped out of school to work for her family. Now Grandma, Mother, My and My’s daughter Jade all sleep on a mat on the packed-earth floor of their apartment. When My tells them about the offer to go to America to meet and possibly marry Khai, her mother and grandmother urge her to go although it means leaving Jade (age 5) with them for the summer.

Co Nga bullies Khai into accepting My into his home and treating her like a fiance for the summer. Failure will mean more match-making in the future. With this threat hanging over his head, Khai does his best. What he doesn’t expect is his intense physical attraction to My, even when she’s wearing a tee shirt and hammer pants (I have no idea what these are) and using Khai’s expensive cleaver to chop down a tree in his backyard.

While working in Co Nga’s restaurant, My learns about an adult education school from one of the teachers who frequents the restaurant. My waitresses, looks for her American father, and studies to finish high school while falling in love with Khai. And attending family weddings (three) and the tenth anniversary ceremony for Khai’s cousin’s death. Cue movie references but I never liked THAT movie; this romance is SO. MUCH. BETTER.

The Bride Test is like Pride and Prejudice but with Vietnamese protagonists and set in America and not nearly as long. My and Khai embark on a journey of self-discovery, adding richness to the romance. Both feel their flaws, both strive to overcome their differences.

So often this type of romance uses problems and lack of communication as humour (a pet peeve of mine), but The Bride Test rises above this: the humour arises from working through problems instead. A frustrating sexual encounter leads to comedic conversations because a strong theme throughout the novel is ‘talk to one another’. Early on, Khai’s brother Quang tells My to talk to Khai, to tell him what she needs. That’s a bit tricky after sex. Khai is motivated to make My happy so he consults his brother the love guru. The Bride Test keeps brushing up against romance tropes that I dislike THEN HOANG REINVENTS THE TROPES. I AM IN AWE.

In many ways Khai is all of us but he is also on the autism spectrum. This means his reactions to grief, for example, are somewhat unusual. After my mother-in-law died 27 years ago I read a lot about grief then I studied grief management in my counselling training. Everyone’s grieving process is different, there is no formula. Even so, Khai’s grieving process was new to me and yet completely consistent with his character. An aunt criticised Khai for not crying at the funeral, wounding him deeply. This shit happens in real life in different ways to lots of people, so The Bride Test is both relatable and informative (about autism).

My is even more relatable for me: I grew up in poverty, I was a mum at 17 and later finished ‘high school’ (the school system was different in Tasmania). I faced discrimination because of being a teenage mum as well as being disabled. I love MyKhai so very much.

The Bride Test is a fun romance with depth. Cultural issues, grief, autism, teenage pregnancy, poverty, and two endearing protagonists whose sex isn’t fabulous the first time out create a literary treasure. I’m keeping The Bride Test nearby so I can re-read it when I’m feeling down.