Britney (Amanda Crew) had a bad breakup when she was in primary school so now she runs a hugely successful business telling people their former partner has broken up with them. Because apparently texting and ghosting wasn’t a thing when this movie was made.

I got maybe 20 minutes in to this travesty of a badly acted and worse scripted movie before the stalkery sexual assaulting breakup victim triggered me so much I had to turn the damn thing off.

1 star is too generous for The Breakup Artist, which is a piece of shit. Standing in dog poo is more enjoyable. This movie is neither romantic nor funny, it’s promoting sexual assault and stalking as “romantic” behavior. Avoid. If someone gifts you this movie, I recommend destroying the artifact by shattering it into the smallest possible pieces, using both salt and iron before burning it in the hottest fire you can forge. Then rinse and repeat, just to be sure. If gifted in a software format, I’d load it onto hardware then do the same. Preferably also to the harddrive and any hardware that came into contact with it just to be safe but that can be expensive. May you forever be spared this travesty of a trope-filled appallingly executed movie.

If you’ve been following my movie reviews over the past week, like my review of The Arrangement, you’ll understand why I’m not indulging in much iso-viewing. What’s popping up on Netflix and Amazon as “recommended viewing” TOTALLY SUCKS.

The Breakup Artist is so excruciatingly bad that IMDB gave it 4.9 out of 10 and Rotten Tomatoes does NOT have a tomato-meter rating and the audience score is 19%. I should have checked RT before subjecting myself to this excrement. Rotten Tomatoes is my friend (unless it’s a feminist take on a fanboy fave like Batwoman or it’s an inclusive take on a white vanilla fave like Charmed. Oo, I just checked Charmed on RT: it’s now at 71%, a much more deserved score than the last time I checked. 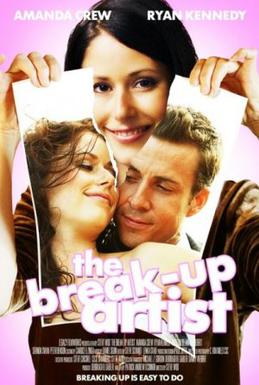