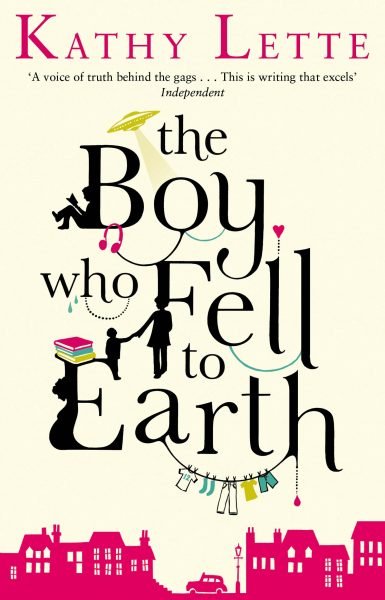 The Boy who Fell to Earth is a play on a movie with a similar name starring David Bowie, based on the fact that a child with Asperger’s Syndrome can apparently seem like an alien. Merlin was diagnosed with Asperger’s at age 3; Lucy effectively single-parented Merlin while her self-absorbed husband withdrew then left to live with his mistress. In the prologue Merlin is 16 and is hit by a car after Lucy loses her temper with him. So he runs away – straight in front of a car.

The first few chapters are frenetic, like a stand-up comedian on speed, dumping lots of jokes in a short space of time. This portion of the book feels somewhat like an emotional dump of pent-up rage and gallows humor used as a protective shield. Nonetheless I felt a strong connection to Lucy as she discovered her baby was on the Autism spectrum. Loving mothers with imperfect babies tend to self-flagellate and look for answers. My son has a small physical disability that is completely unnoticeable even to his closest friends and yet he’s needed dozens of operations; I identified with Lucy.

Early on, Lucy’s husband Jeremy left them. Then Merlin began school, suffering through lack of essential support at school while Lucy fought for him and students beat him up. I identified with this portion of the novel so strongly that I wept even though I thought I was past this pain. My experience was of my first school being a special school, but my parents pulled me out of that school to send me to another school on the other side of town. I was beaten up at school but I never bothered to tell the teachers; after all, Mum beat me at home so I had no illusions about having any rights. During this early portion of the novel, I just wept. Yes, I could see the (black) humor but all I could feel was sorrow.

Later, The Boy who Fell to Earth settled in to more of a narrative about Lucy and her relationships. Some of this was funny and heart-warming while some of it looked like a train-wreck waiting to happen. Lette’s humor is biting; often it’s gallows humor. This is consistent across all of her novels that I’ve read. Sometimes you laugh, sometimes you cry, sometimes it hurts but it’s usually a cathartic pain when it hurts. It’s like Lette pokes the blister until it bursts, ridding the body of toxins.

Although the reader may well be shouting at Lucy not to be foolish, not to do X or Y, at the end of the day Lucy’s foolishness is no worse than that of the average woman who is struggling with life, the emotions, the stresses, and is trying to make sense of it all without a road map. Lette takes the reader through ups and downs, expunging the worst and bringing both reader and heroine to a better place.

Every book of Lette’s that I’ve read also has a reality to it, a concrete-ness that is so fundamental that my first thought when I heard she’d written a book on a mum with an Autistic child, was ‘What is her experience of Autism?’ I assumed that she’d have experience. Not even ‘just’ research, but hands on experience. Because that’s the style of book Lette writes: it is so real you can taste it. Press releases and interviews with Lette have confirmed this: some of the jokes and anecdotes in this novel are part of Lette’s journey with her son.

The Boy who Fell to Earth is a brilliant book but it’s not for everyone. The black humor has put some critics off already, but I’d urge people to read it. Merlin’s degree of Autism is not as mild as some, not even as mild as Lette’s son’s condition; it’s also a specific type of Autism: Asperger’s. Autism is becoming a more commonplace diagnosis, so even though this story is specific in many ways that will not apply to others, reading this novel can give the reader some idea of what the parents of a child with Asperger’s, or many other kinds of disability, endure on a daily basis.

The isolation is common for parents of disabled children of any stamp. Additionally, parents of disabled children are far more likely to separate permanently than those without disabled children. Anti-social behaviors on the part of normal children can be an embarrassing trial at times, but even more so when a child is not developmentally ‘normal’. I highly recommend reading The Boy who Fell to Earth for its educational component leavened with entertainment; if you can’t cope with Lette’s gallows humor, then find a different book, but learn about the difficulties faced by those living with disabilities.

Autism is an increasingly common diagnosis and only one of countless forms of disability. It is my hope that, by reading this or other, similar books, people will develop empathy and understanding for parents and children living with autism and other disabilities.