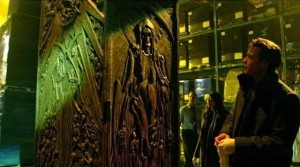 This is the review for episode 2; if you don’t want episode 1 spoilt, don’t read it. You have been warned.

In my previous review I referred to ‘more horror elements’ that were introduced late in the episode. In the interests of avoiding late-episode spoilers I didn’t reveal that there’s a non-sparkly vampire with a ‘tongue’ like a gigantic worm with teeth flying around an ornate box whose exterior is carved with Dante-esque symbols and whose interior is filled with soil.

The four survivors Eph (Corey Stoll) put in quarantine under his CDC (Center for Disease Control) powers, are released as a result of a disinformation campaign propagated by a powerful wealthy man, Eldritch Palmer, whose assistant, Thomas Eichorst (Richard Sammel) has nictating secondary eyelids.

206 dead bodies vanish. One little girl, believed dead, returns home to her grief-stricken father who calls Eph to thank him.

Jim Kent (Sean Astin) has an epiphany: maybe allowing a van out of a quarantine zone wasn’t such a good idea.

Abraham Setrakian (David Bradley) is in jail after being arrested at the airport for trying to help authorities. Thomas Eichorst, old friend that he is, visits Setrakian in jail.

The stakes are high and keep getting higher in The Strain. I’m not sure whether it’s an ‘end of the world’ scenario or merely the end of thousands — or millions — of human beings. After all, vampires need food, so why kill off the entire human race? Corruption, collusion, people covering their asses, people behaving like sheep, people not raising red flags when they should…  The bureaucracy behaves so believably that The Strain is a comedy of errors but it’s a very black comedy indeed.