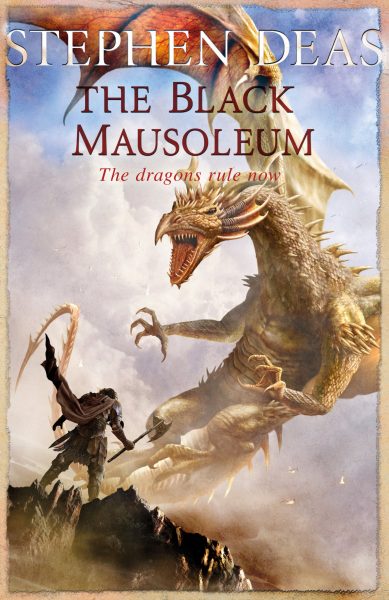 The Black Mausoleum is the latest in a series of novels by Stephen Deas about the Dragon Realms. It is the only book in the series I have read, and I found it a little difficult to pick up the back story. By the end of the book I had some idea of what had preceded this story but I would have found a review of the story so far helpful. As I pieced together the back story, I was never entirely sure which bits were assumed knowledge from the previous books, and what was a gradual revealing of new parts of the story.

In The Black Mausoleum, the Dragon Realms are in chaos. The dragons, once under the control of the Riders, are now free and have ravaged the land. The remaining population – those who haven’t been eaten by the vengeful and insatiably hungry dragons – hide in caves and tunnels. Cities and towns have been razed, and leaders cling to a semblance of power.

Against this bleak backdrop, four main characters are introduced. Kataros is an alchemist, a secretive group with strange powers. She has some dark secrets in her past, and has ended up imprisoned by a group of Riders. While there she meets an Outsider, Siff. Siff whispers a secret to her, which sets her on a mission with him to find hope for the Realms.

Their reluctant travel companion is Skjorl, an Adamantine Man. The Adamantine Men are an order of warriors, whose sworn purpose is to fight dragons, even to the death. Another Adamantine Man, Jasaan, also appears in the story. He and Skjorl have a stormy history, and despise each other while being bound to stand and fight together.

The Black Mausoleum opens with a quote: “True courage is not the brutal force of vulgar heroes, but the firm resolve of virtue and reason.” This is a book about courage, and firm resolve. However, the book seems to set out to challenge this quote. Kataros, Siff and Skjorl all have an element of vulgarity to them. Skjorl especially is portrayed as courageous and a hero but he is definitely vulgar. In fact, I found it hard to find a character I really liked.

The character I ended up most respecting and admiring is portrayed negatively for most of the book. There is tension and strife between the main characters so it is hard to know whose side to take. It is not until the last part of the book that the ideal of this quote seems to be upheld, and even then it is open for debate as to who the truly courageous character is.

It is not just the characters who are rather vulgar. The language and themes of The Black Mausoleum have a flavour of crudeness. Given the bleakness of the landscape of the story, this was in some ways fitting – I had a sense through the whole book of a society fallen apart. However, it made the book hard work to read. I didn’t really enjoy reading it.

The book switches between the different characters, with each chapter being written from a different point of view. Stephen Deas cleverly changes his writing style for each chapter, in subtle ways. The chapters from Skjorl’s viewpoint, for example, are written with shorter sentences and cruder language than the ones following the more sophisticated Kataros. The storyline kept me guessing, too, with some interesting plot turns towards the end.

Over all, The Black Mausoleum is a clever book although not one I enjoyed. If you don’t mind a lot of crudeness, and dark, bleak overtones, you will probably like it more. It is an interesting fantasy world and I did find the back story and different groups of people in the world fascinating. If you think this might be a story you would like, I would recommend starting with some of the earlier books in the series.

Read this if you like John Birmingham’s Dave Hooper novels.