I’m not sure who is the bear and the maiden fair in the attached picture. I think the bear looks pretty cuddly, don’t you?

Theon Greyjoy is cut down from his cross by 2 women. It’s more of the torture, which is pointless, frustrating and makes me want to SCREAM. I mean, it’s not as if they’re not cutting material out of the books; WTF do they have to put in sex scenes in the torture room???

The TV series emphasizes that the story is a soapie. It’s easy to forget that I the books, skipping over the stupid bits… But this sex scene in the torture chamber? AAARGH.

Theon Greyjoy loses his favorite toy. Theon cries. We remember this during the season finale.

Jaime also realizes he lost something. He blackmails his escort into returning to rescue Brienne of Tarth.

The Bastard’s men — oops, no, Ramsay Snow is Bolton’s bastard, Bolton himself isn’t a bastard, except in personality.

Anyway, Bolton’s men reject Tarth’s offer of 200 gold dragons to ransom his daughter because Jaime had told them that he is obscenely wealthy. Thus the road to Brienne’s hell is paved with Jaime’s good intentions. However, Jaime single-handedly (pardon the pun) rescues Brienne from the bear (because she’s the bear — no, she’s the maiden fair in the bear and the maiden fair). She’ll have a few more scars but she’s good to go.

They rejoin Jaime’s escort and get the hell out of Dodge.

Some other stuff happens too… Pity I didn’t take more lengthy notes. I also had good intentions, to finish my rough review the night or the morning after I watched the zode. Now I’ve finished watching the entire season, what specifically happened in this zode is a big vague. In my defence, I watched 5 episodes in a couple of days as well as some other stuff.

There was blood, sniping, gore, and probably boobs and butts. Because this is Game of Thrones. Next time I’ll have better notes, promise. 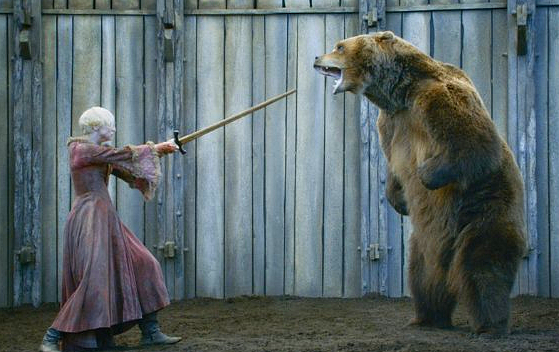