The Awesomes is an animated superhero comedy created by Seth Meyers and Michael Shoemaker, both known for late night comedy shows like Saturday Night Live. Proc (Professor Doctor aka Seth Meyers) is Captain Awesome’s (Captain America spoof) son and a disappointment to his father who, upon his retirement, wants to hand the Awesomes over to Perfect Man (Josh Meyers).

Perfect Man is, well, perfect except for his arrogance, narcissism and being just plain irritating. Perfect Man says that he couldn’t do the job as well as Captain Awesome so he refused the position because, being Perfect Man, he won’t do something if he can’t do it perfectly.

Muscle Man (Ike Barinholtz), Proc’s friend, pushes Proc to volunteer. Proc volunteers. Out of desperation, he’s allowed to head the team — except everyone quits, so he has to find a new team… with diminished resources. Proc finds Sumo (Bobby Lee), a Japanese version of the Hulk except he’s a 10 year old boy. Frantic (Taran Killem) is a hillbilly and not overly intelligent Flash. Impresario (Kenan Thompson) is a metrosexual, possibly not heterosexual, with mother issues and a magic jewel that makes a genie appear — who always, no matter the form, always, looks like his mother. The list goes on.

The dastardly villain who may even twirl his mustachios is Doctor Malocchio (Bill Hader) who, in between hypnotising everyone and hatching evil schemes, forces his henchmen to eat gourmet food.

Joyce Mandrake (Rachel Dratch) is a bespectacled government official who is officious and yet… there are hints of a deeper personality. By the end of the season I wondered if I’d kidded myself though: the characters are kept very shallow, seemingly because the writers thought there is no room for depth in comedy?

The Awesomes spoofs superhero stories, team stories, Star Trek The Next Generation (they have a holodeck too), public service/government dynamics and more. There’s a huge amount of untapped potential, lost in favour of staying light and trite. However, I enjoyed it for its light comedy as a break upon arriving home after a long day of research. 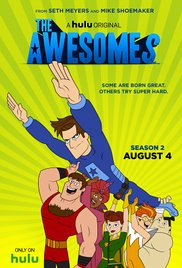