The Animals In That Country was published in 2020, so the first year of the pandemic. When I first heard about it I thought I should read it but, when push came to shove, I just couldn’t. So it’s been floating around my TBR (To Be Read) pile for a couple of years. Then I finally pushed myself to read it, just before I ended up in hospital. Which means it’s been a couple of months since I read it, but the review is better late than never, right?

Jean is an alcoholic tour guide at a native animal park-slash-zoo in the Northern Territory. Although she takes sneaky sips of vodka from her hip flash while on duty, otherwise she seems nice. She’ll do anything for anyone, especially those she considers family and the animals she helped rescue.

A pandemic hits but it’s not covid. Remember this book was written before covid, to be published early 2020.

This drives some people to do things that appall others, like free animals in zoos. Or reject their pets. Some go so far as to murder animals.

Then, for complicated reasons, Jean ends up on a road trip with a dingo she doesn’t even like. (That bit is very “because plot”.)

The differences between Literary Fiction and Speculative Fiction are vast, even when a novel clearly spans both genres but the author seeks to establish Literary credibility. I suspect the problem with The Animals In That Country is that it seeks to be Literary more than speculative fiction.

The authors who blurbed this novel are James Bradley and J P Pomare. While I can’t comment on their books per se, the authors who blurb THEM are telling. Simon Ings blurbed James Bradley, and Simon Ings’s book Wolves is a literary spec fic story in which a blind person with albinism “accidentally” raped a teenage boy. And that’s just one of the many reasons I destroyed that book after a vague attempt to be “fair” and not biased as a result of Ings misappropriating blindness and albinism. Oh, and Ings is one of THOSE authors who went online to tell me how very wrong I am in my extremely understated review and opinions of his book.

And J P Pomare’s website blurb says “J P Pomare is the author of Call Me Evie, a literary thriller in the vein of Gone Girl, Room and Before I go to Sleep.” I saw the movie version of Gone Girl so now I pointedly avoid ANYTHING that associates itself with that story. UGH.

So I guess it’s no surprise that the author takes this nice although somewhat fucked up woman and strips absolutely every single thing from her. Everything. And gives her NOTHING back as a result of her journey, her character arc.

Even the animals as characters in The Animals In That Country are pretty awful. Freed predator birds threaten humans for food instead of flying off to feed themselves. There’s so much malice in animals, so very much. I hope I’m wrong but it seemed that the author is one of those PETA types who want to kill all animals instead of allow humans to have relationships with animals. She certainly seems to believe that human-animal relationships totally fuck up animals, without exception.

I read this book with Silkie, my seeing eye dog, beside me on the couch. This made the story even more difficult to read. I worried about her. When she first arrived I worried that being my seeing eye dog is a pretty shit life for her. I’d just got to the point of understanding that she really loves me and she loves working then I read this story. Talk about downward spiral.

In the end, I figure that we are who we are. Humans can be pretty fucked up too. A human who acquires brain injury from, say, covid, is no less valid than they were prior to covid. So my beautiful pupper was bred to be a seeing eye dog. That makes her no less valid a dog or a “person” (she has a personality and opinions!) than a wild dog. She’s just different.

Animals are people too

And, most importantly I think, I try to work with her in a team. That doesn’t mean she gets to take me on the travellator after we went on it once and I gave her a new instruction to “find the door”. But it does mean that I’ll take her in to South Point to ride the escalator and travellator once each just because she loves it so much. Even though I don’t actually want to go inside myself. And on the way home, if the weather is ok and I’m not feeling too shit, I let her have zoomies in the park. I enjoy this because she enjoys it.

Right now we’re in the study with the door closed because hubby got out the vacuum cleaner and she HATES it SO MUCH. Hubby and I understand Silkie’s hatred and fear of the vacuum so we consider that first before starting the thing up, and move Silkie to a less stressful location.

It’s all about recognizing and responding to our non-human companions appropriately.

Some people enjoy reading novels where the protagonist suffers and sees no light at the end of the tunnel. I remember my daughter reading some doorstoppers along that vein by a woman whose name I cannot remember and can’t find. Anyhoo, if you like those kinds of books, if you enjoy Literary books differentiated from the Austen kind of Literary, more in the vein of the Bronte sisters, then you’ll enjoy The Animals In That Country.

Probably the most complimentary association I can make is that The Animals In That Country reminds me of Charlotte Wood’s the Natural Way Of Things. Wood’s book also aimed to be more Literary and less spec fic, which is why – at times – it was frustrating. (Why the hell didn’t they dig their way out from under the fence? How did all those large animals race through the fenced area BECAUSE FENCE???)

So, basically, I didn’t enjoy this novel. It was a downhill slide all the way but, hey, I finished it! Achievement unlocked!

And I know other people RAVED about it. Hell, it won the Aurealis Award for best science fiction novel in 2020. The Aurealis Awards judges and I often disagree. They’re very selective about who they allow to judge awards, don’t for a minute think that it’s an open process! But that tells you that certain people loved the novel. Or at least wanted to be Literary enough to love it. So there’s that. 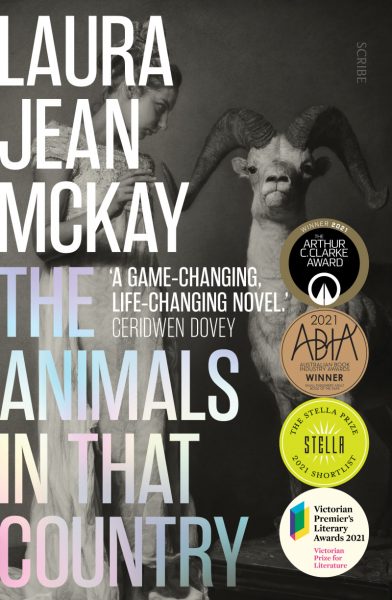