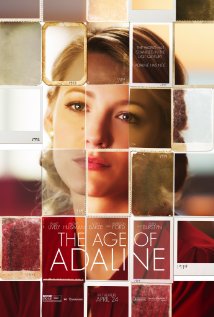 The Age of Adaline opens introducing Adaline Bowman (Blake Lively) while she’s acquiring forged identity papers so she can change her identity in a few weeks’ time. A voiceover narrates like a slightly cheesy documentary; this narrative peters out after establishing the backstory then resumes as a bookend for the last few scenes.

Adaline Bowman was born in the early 20th century. A freak conflux of events caused Adaline’s body to stop aging; this is a science fiction story not a fantasy. Yay for the absence of vampires!

In the present day, Ellis Jones (Michiel Huisman) pursues Adaline as his ideal love interest. He’s too perfect: just the right about of pursuit then, when Adaline (aka Jenny at this stage) tells him a firm ‘no’, Ellis hands a bouquet of flowers to a complete stranger and walks away, head down.

Adaline’s daughter, Flemming (Ellen Burstyn), now old enough to masquerade as her mother’s grandmother, meets her Adaline for lunch. They have a great relationship where they mother each other, with different perspectives: one is seemingly forever young while the other has diminishing years before her.

Challenged to live life and not merely pass time, Adaline reconsiders and reconnects with the perfect Ellis. They go to Ellis’s parents’ for the weekend, where Adaline meets William Jones (Ellis’s dad and Adaline’s former lover from the 1950s, played by Harrison Ford). Things get complicated.

Harrison Ford has aged well, appearing as the elderly father and a pivotal character essential to the plot. I don’t want to say much here because SPOILERS.

The narration in the opening scenes is unusual, getting the movie off to a slightly shaky start by calling into question the genre; romances aren’t usually narrated like documentaries. I wondered if this was meant to be more of a science fiction movie and feared I was in for another Lucy. However, this narration set the scene by giving us Adaline’s backstory as a brief montage with voiceover then the narrator went off for coffee (or something; I may be projecting) until the end.

The Age of Adaline passes the Bechdel Test in spite of being a romance because Adaline has relationships with women: her daughter and an old friend who is a professional pianist.

Adaline’s pianist friend, Regan (Lynda Boyd), is either completely blind or has severely limited vision; Adaline casually takes her friend’s hand and places it on the base of her wine glass. There is little comment about Regan’s blindness other than playing on the fact that Regan doesn’t know Adaline hasn’t aged; apparently she’s evidence of Adaline breaking another one of her rules for self-protection. In spite of this break in consistency — Adaline’s ongoing relationship with her daughter is stated as her only broken rule — this relationship is unusual and iconic, treating a blind woman as a talented professional capable of working for her living and having fun at a New Years Eve party.

After endless movies about vampires, this take on immortality with a focus on the woman as an active agent in her own life is a refreshing change. It reminds me of Science Fiction Masterworks short stories I read as a teenager but I don’t remember any romances or even many women characters in those anthologies.

The Age of Adaline is an unusual romance focusing on the woman, using her agelessness to explore her attitude towards life and her relationships. I found this movie to be a refreshing change. Highly recommended.