Madison May is a real estate agent with acting aspirations. Then Clayton Hors murders her. Felicity Staples is a political reporter. Her crime writing colleague isn’t available so she receives a tip and visits the crime scene. Suddenly she’s hooked: Felicity needs to know why. Then she discovers Clayton Hors is jumping through parallel worlds to murder Madison May in every world. Felicity feels compelled to act, to try to stop him.

A slut-shaming serial killer, police and civilians profiling people, Maddie’s various careers, her awareness of race when hanging out with her colored friends… this novel has it all.

Underlying it is a group of universe jumpers who claim altruistic motives. Felicity, as a journalist, starts asking questions. Especially after one of them threatens to “fuck up [her] life”.

I give Max Barry full marks for many things including his description of marital disappointment resulting in throwing your toys out of your cot, the marital equivalent of divorce. However, there is at least one glaring man-error. A woman walks into a smelly slimy pool that is so polluted she can’t see the bottom, gets covered in filth from head to toe, then goes to a café to meet someone relying only on the weather to dry her. I am no fashionista but this squicked me so much I almost wanted to have a shower and scrub myself before finishing the story. Men, amiright?

Multiverse speculative fiction has been around at least as long as quantum theory. The first multiverse story I recall reading was when I was a child reading Mom’s books. There was a guy who jumped universes to live with alternate beautiful wives with whom he inevitably became bored then he’d jump again to restore interest. It was very misogynist, definitely a John James (male equivalent of a Mary Sue) and quite “bleugh” for a girl in her formative years. As a spec fic fan, Barry is conscious of the history of this sub-genre. This novel is an antidote for my first such read.

Barry discusses the various theories of multiverse travel. Although a valid theory, I take exception to him using the law of conservation to explain travel while also killing off alternate selves. To me that is an inherent contradiction. And with a multitude of multiverses, how would you even know you can’t go back? There are just too many, it would be like trying to find your way through a mirror maze by sight only much worse because there would be an almost infinite number of potential paths.

The 22 Murders of Madison May is written by a speculative fiction fanboy with a track record of brilliant writing. I have So Much Love for Machine Man, Jennifer Government, The Company, etc. (I haven’t written reviews for the novels I bought myself, sorry! If I buy or borrow the book, I count it as an obligation-free treat.) Barry sidestepped scathing satire at least temporarily to write this story (following on from the space opera Providence) although his blog is currently as scathing, satirical and political as his early novels. I highly recommend this multiverse thriller.

Rating: 4 out of 5 stars
ISBN: 9780593085202 (US) 9780733645808 (trade paperback, Australia)
Published: Penguin Random House in the US and Hachette in Australia
Format: all the shiny formats but I read the paperback version
Released: 2021
Category: adult speculative fiction, multiverse 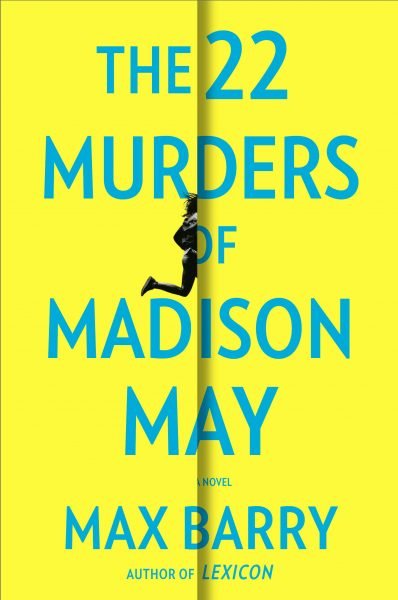