Jason Boog of GalleyCat wrote a short blog on the financial uncertainties of being a genre novelist, referring to Brian Keene’s financial facts on advances and income, Mark Lawrence’s honest post on Reddit about how Amazon’s sale of Prince of Thorns adversely impacted on his income, and Jim C. Hines talking about the vagaries of an author’s income, including mentioning that he still has a day job.

Epic squee for our Kiwi cousins: the Almighty Johnsons, a drama/urban fantasy/comedy makes the finalists for New York Festivals Worlds Best Television and Film in the drama category.  I interviewed Emmett Skilton and Tim Balme of the Almighty Johnsons in August 2012; now they’re well into shooting season 3.

Copyright and magic as a profession

Wow, not a topic that had ever crossed my mind, but here is BoingBoing’s post linking to a PDF on the subject.

BBC America reports that Allison Hoffman crocheted the Doctors and the TARDIS, brilliantly. 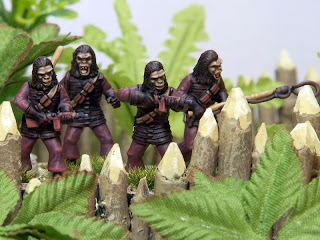 I just thought I’d share this because…  [searches for thin pretext]…  because… I think it’s cool, ok?

John Lambshead describes himself as “a semi-retired research scientist who now writes fiction and collects toy soldiers.”  John collects and, I assume, paints miniatures (they don’t come pre-painted you know!), setting up dioramas for photos.  Instead of playing games the easy way (getting a computer to do all the hard work for him), John and friends get together, build their own sets and control their own gameplay.  Then John blogs about it as in this post about Kursk, a blog about a large scale battle.

When my son was 6 his school told me his spatial abilities were rated well below his other abilities.  Don’t get me wrong, his overall IQ was rated at 97% but if his spatial ability had been consistent with his other abilities he would have been a candidate for MENSA (MENSA requires 98% IQ).  I was instructed to improve my son’s spatial abilities thus we embarked on the building of much Lego, learning to follow instructions etcetera.  When he was older I encouraged him to play miniature games that would nurture his artistic side (painting miniatures and building sets), his spatial and mathematical abilities (using rulers to measure movements, performing his own calculations) all the while playing in a social environment.  I was a bit disappointed that his friends went down other paths – like Warhammer just after we’d bought LotR miniatures – then he got into LANs, eventually becoming the Starcraft progamer he is today…