If you’ve been following this blog for any length of time, you’ll have realised that I have a girl-crush on Jim C. Hines for his work on women’s cover poses.  This link gives you a list of my blog posts that mention Jim’s blog and his work.

On 18 January 2013 BBC news magazine posted an article titled The battle against ‘sexist’ sci-fi and fantasy book covers.  I think it’s a bit of a concern that the word ‘sexist’ was put in inverted commas in the title of this article: are they implying that sexualising women for the male gaze isn’t sexist?   Or are they that women want to be sexualised and disempowered by seeing images of women in uncomfortable or even physically painful poses, having their boobs and butts emphasised, wearing high heels and ridiculous armour that forces the women characters into the role of objects of male desire rather than the kick-ass chicks they could be?

Thanks for the clarification, Anthony.  I still feel that some more obvious acknowledgement was needed if that was the context, but the article itself was pretty good.

This lengthy (for an online magazine) article says (in part)

Jim Hines straddles the remnants of a defeated alien species (a table), and clasps a pistol (a toy gun) as he triumphantly raises a cyborg’s head (a toaster). Sometimes he fights battles alongside his romantic interest (a large teddy bear).

But no matter the mission, Hines shows some flesh. Just because he is waging a war, it does not mean he cannot be alluring at the same time, right?

Hines, a fantasy author, is posing like some of the female characters on science fiction and fantasy book covers he says objectify women. 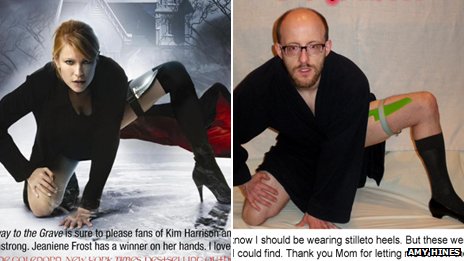 Go.  Read the article in full, then go to Jim’s webpage and see his blogs on the subject (there are several), and join the Jim Hines’ fan club (he’s the thinking woman’s geek idol).

Also note that you’ll be joining in the hundreds of thousands who’ve already wended their merry way through this article: at about 4pm AEST 19 January, Jim tweeted that this post has already hit ‘most shared article’ on the BBC website, with over 350,000 views so far.  It took about 15 HOURS to reach that point.

A few years back the SciFi pay TV channel changed its name to Syfy (pronounced siffy) and began to distance itself from its science fiction origins and viewers.  This continues with its lack of commitment to Alphas, a TV series ending after two short seasons, abandoned after a cliff-hanger ending.  The official announcement from Syfy:

Syfy’s drama Alphas is ending its run after two seasons. “Syfy has decided not to renew Alphas for a third season,” the network said in a statement. “We’ve been proud to present this entertaining, high-quality series for two seasons and to work with an incredible ensemble of talented actors, producers and creatives as well as our partners at BermanBraun Television. We’d like to thank the show’s dedicated regular viewers for their tremendous support.”

Alphas has a rating of 7.3/10 on IMDB and a loyal following.  This could be another Firefly.

How to make an itsy bitsy book necklace

Awesome Sauce Asshattery posted instructions on how to make your own itsy bitsy book necklace.  Isn’t it adorable?