A wrap of today’s SFF news, some links and some fun.   If you have news to be included, DM or email me.  Please note: this is your Saturday fix.  Please send news for Sunday 🙂

My impressions of the nominated artwork is that I have a personal favourite and a second place.  My favourite is Ben Baldwin’s cover of Dark Currents (Newcon Press)

and my second place is Blacksheep for the cover of Adam Roberts’s Jack Glass (Gollancz).

I prefer Dark Currents for the mood and colours; if I’m judging a book by its cover, this is the winning candidate.  Having said that, my love of bright colours and general cleverness makes Jack Glass a definite second place; a truly fitting cover for one of Adam Roberts’ novels: Roberts dances through the SF genre, referencing the genre way beyond my knowledge, and punning his way through crises. at least in his comedies.  Roberts is definitely on my to-read list; I haven’t read more of him because my first Roberts’ novel was Dragon with a Girl Tattoo and I hadn’t read Girl with a Dragon Tattoo nor seen the movie when I read the book.  Floundering reduced my enjoyment.  Now I’ve caught up I feel a little intimidated approaching Adam Roberts – will I get the joke? – but he’s on my to-read list for 2013. 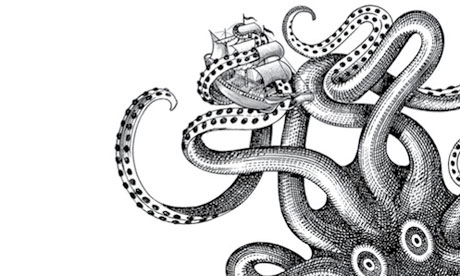 The Kitschies awards are science fiction/fantasy awards.  David Barnett of the Guardian says

Of all the things you could give a writer, booze, money and awards probably come top of most wish-lists – which is why the annual Kitschies for “progressive, intelligent and entertaining science fiction” are always a joyful affair.

The Kitschies – born out of the Pornokitsch books website – despite being for SF, are a broad church: the only rule is that the prizes go to “novels containing elements of the speculative and fantastic”…

Joining [Jared] Shurin and [Patrick] Ness on the judging panel this year is author and editor Rebecca Levene, Lauren O’Farrell, Gary Northfield and Ed Warren. Levene says: “Each title on these shortlists surprised me. There are settings I’ve never seen used before, viewpoints I’ve never considered, ideas I’d never thought and worlds too weird for anyone but their particular author to have invented them. For me that’s the essence of speculative fiction.”

The 2012 finalists for the Red Tentacle:

The 2012 finalists for the Golden Tentacle:

The 2012 finalists for the Inky Tentacle:

Any thoughts on the lists?

A short story, Blood and Water by Kim Falconer, is in the Vampires Gone Wild anthology.  Here’s the trailer:

If the movie is half as good as the trailer, this is a must see!

Matthew Dicks discusses why authors should use twitter, talking about the resources and support he’s found with his twitter networking.  Matthew also talks about the thrill of connecting to authors he admires, but he misses one aspect: building a community and support-base increases authors’ chances of being published (as opposed to self-published) and selling their work whether self-published or published by a house.