I made Jessica White a thank you card. Jessica White was a guest on Dark Matter Zine’s podcast in January during the Authors For Fireys fundraiser in January 2020. This mammoth undertaking was organised by Emily Gale and Nova Wheetman. They raised $513,149 to support firefighters and to help Australia’s bushfire survivors.

Jessica White is the author of the novels A Curious Intimacy (2007) and Entitlement (2012) and a hybrid memoir about deafness, Hearing Maud (2019). Her short stories, essays and poems have appeared widely in Australian and international literary journals and she has won awards, funding and residencies. She is currently writing an ecobiography of Georgiana Molloy (1805-1843), Western Australia’s first female scientist. Jessica is a ‘fellow’ at the Rachel Carson Center for the Environment and Society in Munich, Germany. You can find her at www.jessicawhite.com.au

This card began its life in 2019. I started card making again, with experiments like purchasing some gorgeous rice paper and adhering it to cardstock. However, I knew next to nothing about making cards including what dimensions are suitable. This card was way too big and collapsed on itself.

After research and experimentation, I cut that card in half to make a non-standard but smaller card that could stand up under its own weight. Then I added the die cut birds from a Tim Holtz die set and embossed the “thanks” in gold using Versamark ink, gold embossing powder and a heat tool.

By the way, this card was finished and mailed off months ago. This post has been sitting in my drafts folder for months. I’m trying to shake off the dumpster-fire-in-a-flood that is 2020 and instead focusing on enjoyable things. Like craft. 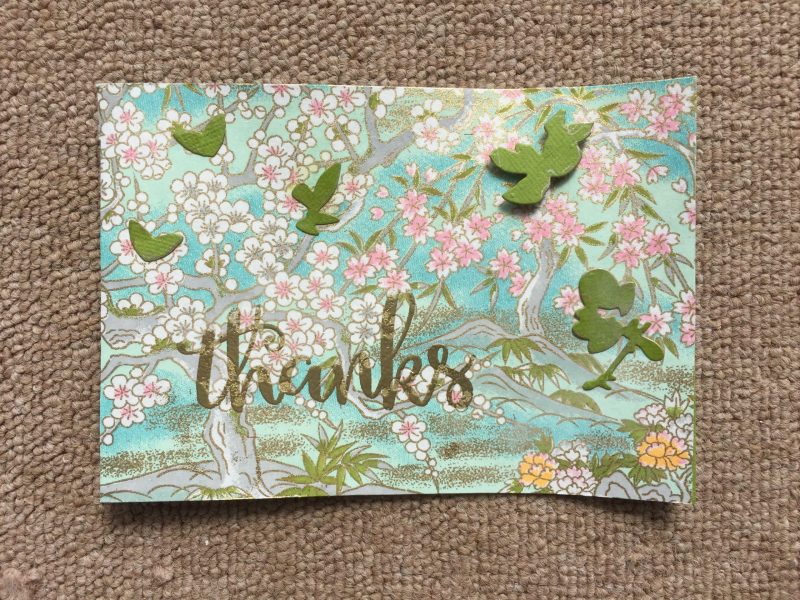 At the moment I’m living in an apartment that is, quite frankly, a bit of a disaster. As soon as we moved in, my husband and I realized the heater wasn’t working. In Canberra. In winter. When it gets down to -8 overnight at times. Then we discovered the oven and dishwasher are likewise faulty, all of which probably date back to the construction of this apartment in or around 2006. And the storage cage leaks so we spent one evening carting all the stuff we’d stored there up two flights of stairs. A lovely relaxing way to spend a Sunday evening.

What does all of this have to do with card making? Well, between the heater not working, the real estate agent refusing to fix it and instead opting to evict us, even arguing in court that he should be allowed to evict me because I’m disabled, I haven’t unpacked and organised my craft supplies. Which means that I can’t give you the names of specific items like which Tim Holtz die I used.

Back to the future

On the upside, after moving in (argh) I promptly started looking for a home to buy in Canberra. AND WE HAVE FOUND A GREAT NEW HOME. Now we just have to wait 6 to 8 months for it to be finished, hope the pandemic doesn’t screw us over financially, and then we can move in. Then I can continue with this series of cards that celebrates one of the joys in my life. Then I can, hopefully, give you relevant information just in case you think “that’s cool, I want one! What’s it called so I can find it?”

This week, a week after the heater was finally fixed, I’ve started pulling out craft supplies to try to play once more. I’m struggling to get the headspace and to take risks – I tried coloring over the weekend but felt like a supreme failure. I’m vision impaired, nothing I make will be a masterpiece. It’s not about being the best or even being “a professional” crafter; this is about taking time for myself and hopefully sharing joy with others. So I’m pushing forward even though unpacking means more packing in 6 months. Sigh.

We all have our hurdles and burdens in this time, we’re all struggling in different ways.

Be kind to yourself. Look for ways to nurture yourself. My thoughts are with everyone in this time although I’m trying to cut back on the doom-scrolling. Hugs!