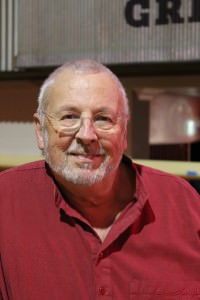 Terry Molloy was Davros in Doctor Who: I interviewed Terry here.   Terry Molloy’s panel is available in both MP4 (video) and MP3 (audio only) versions at the bottom of this page.

I got side-tracked so I was late to this session.  After starting video-recording I discovered that I was almost out of memory because I’d forgotten to reformat the memory card after downloading yesterday’s panels.  Unfortunately I missed a lot of this panel, but I got some good stuff in.  One of my favourite moments – apart from the Davros voice – was the guy in the wheelchair asking how Terry managed Davros’ wheelchair.  Terry is an energetic, enthusiastic speaker who probably knows as much as anyone about Davros.  Shame on the BBC for not bringing Terry back as Davros in the new series!

(Note: after leaving Terry’s panel, the minion figured out how to select individual files for deletion so we had memory again.) 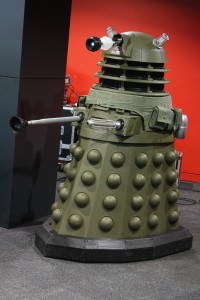