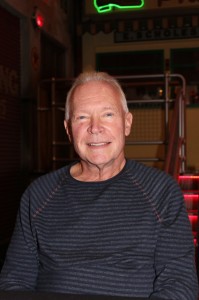 Thanks to Armageddon Expo, I talked to fantasy author Terry Brooks whose credits include 23 New York Times bestsellers during his writing career, and has over 21 million copies of his books in print. He is one of the biggest-selling living fantasy writers.

Terry’s interview is available in video (MP4) below. It will be available in podcast (MP3, audio-only) format soon.

My interview questions that Terry Brooks answered even if I didn’t get around to asking them were:

You studied English Lit at college before becoming a lawyer and only later started publishing fantasy. When did you know you wanted to be a writer and why the career detour?

Rumour has it that you credit William Faulkner as a key influence in your writing style; is this true?

What other authors and novels have influenced you?

Nicki, a writing student, wants to know how have you done it? How have you written so many books and so many bestselling novels?

You started with the epic fantasy The Sword of Shannara and since then you’ve written extensively both before and after this novel. How do you keep getting inspiration and keep building on this world?

You’ve written two movie novelizations: Phantom Menace and Hook. How were they different from writing in your own sandbox?

Terry talked about the TV series the Elfstones of Shannara and the Magic Kingdom movie, both of which are in various stages of development. He made an exciting announcement: the TV series is being shot in New Zealand by people who have experience with these things. ‘It’s Game of Thrones for the whole family’.