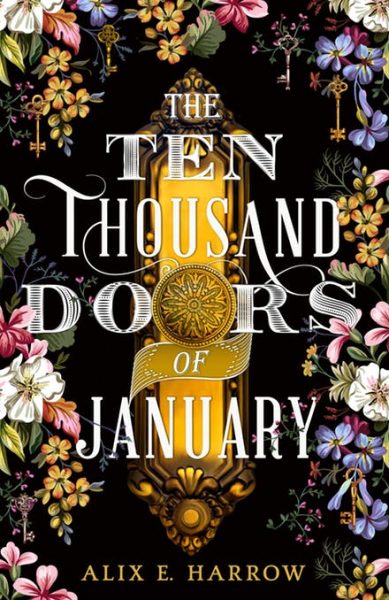 January is a red-skinned child, an oddity in a world that likes to categorise skin colour. Ultimately, people put her in the ‘colored’ category because she’s not white. However, her father’s employer, Mr Locke, is her carer while her father travels the world seeking treasures to increase Mr Locke’s wealth.

One day January finds a leather-bound book with the somewhat worn embossed title ‘The Ten Thousand Doors’. These doors are doors into other worlds, other universes. Mr Locke’s secret society wants these doors kept secret. Rarity of objects increases their value.

January is a rare ‘object’.

I love the Ten Thousand Doors of January. It’s one of those books that could have been written just for me, with its homages to works like Charlotte Sometimes, A Wrinkle In Time and, of course, Doctor Who.

If you’re interested in reading more, including a few modest spoilers, read on. Otherwise, just read the book right now.

The Ten Thousand Doors explores issues of race and class as a minor but persistent theme. January grows up privileged but it’s a privilege bestowed upon her by her father’s wealthy white patron. She’s alternatively treated with transferred respect or treated like a person of colour in a racist world. As she matures, she realises she’s an anomaly, which makes others uncomfortable. And when she adventures without her patron, she realises how conspicuous she is in this white world and how much she is the target of suspicion or scorn.

Throughout ‘our’ world, class differentiation creates privilege or poverty. Harrow exposes this with January’s coloring being ‘excused’ because of money, her coloring causing problems when she ventures out without protection from wealth.

January’s upbringing is different from her mother’s small rural household. Harrow contrasts January’s privilege at the outset with her difficulties and need for companions once she leaves her privileged world.

However, that’s not all: Harrow also contrasts freedom and power assumed by men with the constraints suffered by women.

January vs the mad woman

Yup, The Ten Thousand Doors totally goes into the ‘madwoman in the attic’ trope. Although I’m not usually a fan, Harrow uses this trope to excellent effect. The ‘mad women’ are inconvenient women whose middle class families create stories about their madness to control them and to institutionalise them. The conditions at the institute are so appalling that January thinks the institute itself may well have driven some of these inconvenient women mad.

January vs the ‘albino’ trope

Using extreme paleness to symbolise evil is a trope that differentiates between ‘normal’ whiteness and extranormative whiteness. An example of this referring Nazi crimes away from normative white guilt (away from normal white people) onto ‘those extreme whites’, people with albinism. Instead of using the ‘extreme paleness equals evil’ trope that reinforces prejudice against people with albinism, I wish creators would assign evilness to ‘normative’ whites.

Not only does The Ten Thousand Doors of January reference — however obliquely — works like A Wrinkle In Time and Doctor Who to name but two, there are more overt, more recent references for the ‘trufan’. Anyone who’s read N K Jemisin’s Broken Earth trilogy will love the homage on page 356. These references are like chocolate sprinkles on a latte, adding richness to flavor to sate my caffeine addiction.

I said it before and I’ll say it again: I love The Ten Thousand Doors of January. There is adventure, romance, villains in hot pursuit, agendas exposed and possibly the world at stake. However, I’m not a huge fan of ‘if we don’t win, the end of the world is nigh’ because it’s not really relatable. Harrow takes this trope and makes it personal: I care what happens to January and her friends. Although the novel is a standalone, and despite my trilogy-fatigue, I want more. The Ten Thousand Doors of January is a love story to genre, a romance in itself and a book to fall in love with.