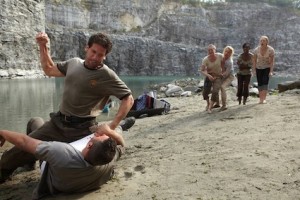 Rick (Lincoln) and the rest of the Atlanta survivors return to the safe camp where Rick is reunited with his family. His wife Lori (Callies) returns to her husband without a word about the fact she has been sleeping with his partner Shane (Bernthal).

The day after reuniting with his family, a guilt-ridden Rick decides to return to Atlanta for Merle (played in the previous episode by Michael Rooker). He is accompanied by Glenn (Yeun), T-Dog (Singleton), and Merle’s brother Daryl Dixon (Reedus).

The group comes under fire from other members of the camp, claiming they will be leaving the camp undermanned just after a zombie has found its way into the camp. The group heads off anyway having declared they will bring back the artillery that Rick had cleared from the sheriff’s office but dropped before being holed up in the tank.

A confrontation between Lori and Shane reveals that Shane was the one who told Lori that Rick was already dead. After this, Shane happens upon Ed (Minarovich) with whom he had an earlier altercation. Ed has just hit his wife Carol (McBride) and is in the process of trying to attack the women coming to her defence. The freshly spurned Shane drags Ed away from the women and beats him to a bloody pulp, only stopping when Ed’s wife begs him to. Shane threatens that if Ed ever touches his wife or daughter again, he won’t stop until Ed is dead.

The episode ends with Rick, Glenn, T-Dog, and Daryl getting to the roof of the shopping centre, only to find Merle has reached a hack saw and cut his own hand off to get out of the handcuffs.

I did not see the end of this episode coming, though having seen Saw I probably should have. We see Merle on the roof desperately reaching for the hacksaw at the beginning, but I just assumed he could cut the handcuffs. Assuming of course that he even reached the hacksaw and wasn’t eaten by a ‘geek’ (The Walking Dead’s slang term for zombie).

I must admit that zombie media is not often high on my horror wish list. Most of it is predictable, dull, and gory purely for the sake of being disgusting and adding shock value. The mindlessness of the zombies often annoys and bores me as well – I like my supernatural villains to be intelligent villains! I wish that more zombie media could be as engaging and riveting as The Walking Dead because, at this early stage, I am hooked.

“What I did was not on a whim. Your brother does not work or play well with others.”

Tell it to the frogs.