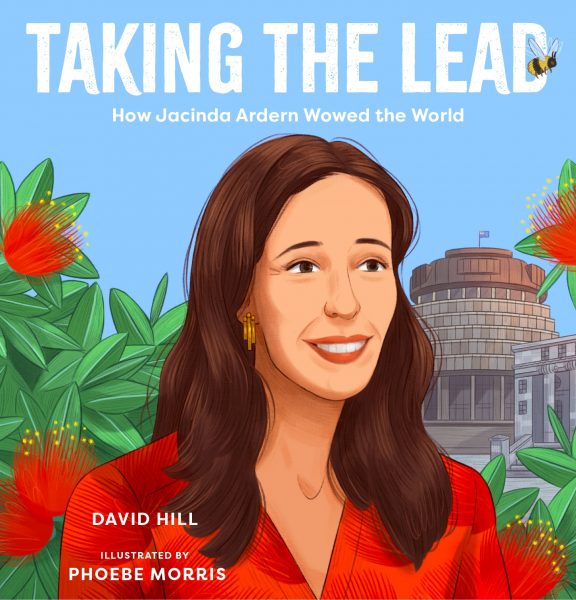 Taking the Lead (due for release on March 3rd 2020) is the latest in the series by New Zealand writing and illustrating team David Hill and Phoebe Morris. This children’s book focuses on current NZ Prime Minister, Jacinda Ardern.

This book is a biography, in a child friendly format, covering Jacinda’s life from birth until 2019. Beautiful illustrations fill each page with clear, colorful drawings. Included are the key events leading to her appointment as Prime Minister and beyond, as well as moments of note such as the birth of her daughter and her highly publicized response to the mosque shooting in Christchurch. The text also repeatedly highlights her driving goals and values: “peace, climate change, women’s rights and ending poverty”.

Taking the Lead is a clear and concise summary of the life and drive of Jacinda Ardern. As a biography it contains many dates and facts. There are a few bits of storytelling context for a young audience, but the text leans much more toward the facts rather than a story about her life.

I am a fan of a biographical series for children. I was interested to see how this series compares, especially as this series has won awards. Also, Jacinda Ardern is someone I personally admire and encourage my kids to look up to. I really wanted to like it. The issue is, after reading, I felt underwhelmed. Don’t get me wrong, it is a solid account, with enough material to be informative, and not so much as to be overwhelming. A great balance for primary aged children. I just felt like it lacked a certain spark.

Perhaps this is just due to the fact that it is not a biographical story. Or maybe it was that I learnt a lot about Jacinda Ardern’s life but didn’t feel connected to her personally, as I might have if it was told in the first person. Or perhaps it is just that New Zealand writing, like its culture, is typically modest and understated. For example, the final motivation to its young audience is “Like New Zealand’s young leader, they just have to get on with it”. Whatever the reason, I wanted it to go further.

All of that being said, my kids enjoyed it. Ultimately, with Jacinda Ardern as the subject, and my children hungry to know more about her, they were satisfied.

Notable to parents reading this book with their children is the inclusion of the mosque shooting in 2019. There are not many details of the event, the page mostly centers on Jacinda’s response, but it does mention a gunman killing many Muslims. Be prepared to talk with your children about this as it may bring up questions.

Taking the Lead is a solid dive into the life of New Zealand Prime Minister Jacinda Ardern. For children who want to know more about this modern day hero, it’s a great snapshot of how hard she worked to get where she is and the core issues that drive her. Altogether, it’s a good profile on a worthy subject, but could have used greater creativity in the storytelling to go to the next level.